Posted on February 5, 2018 By Elizabeth Boatman 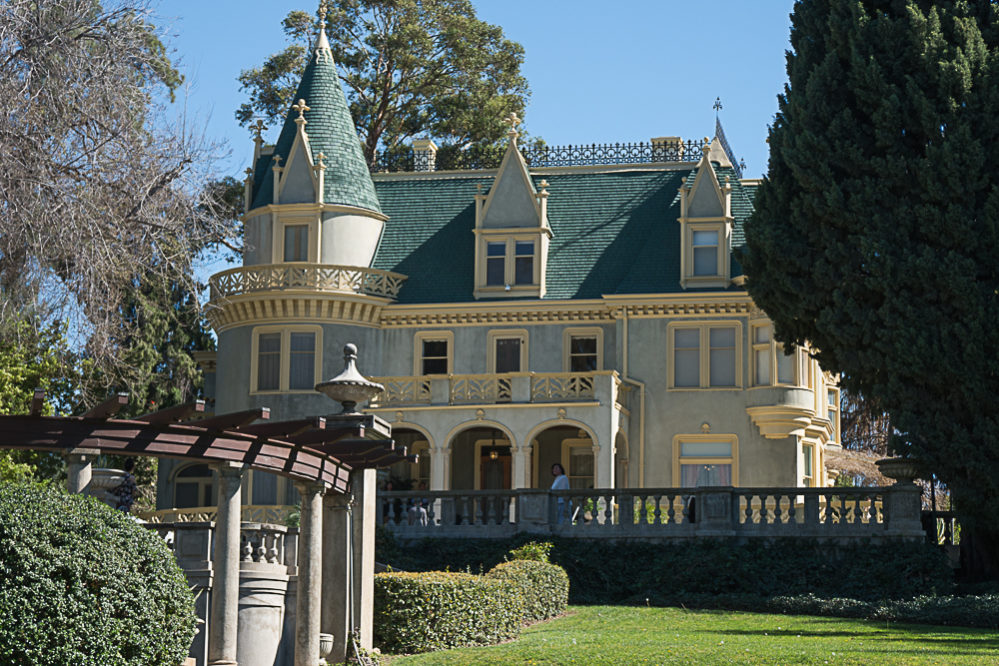 I was searching for nearby interesting architecture, when I discovered Kimberly Crest. I expected to find the usual Victorian mansion since there are several in the immediate area.  Later, I learned that this home replicates a French chateau.  It was designed and built for Mrs. Cornelia Hill in 1897 in Redlands, California.  She was the first of three amazing women to own this fabulous house. 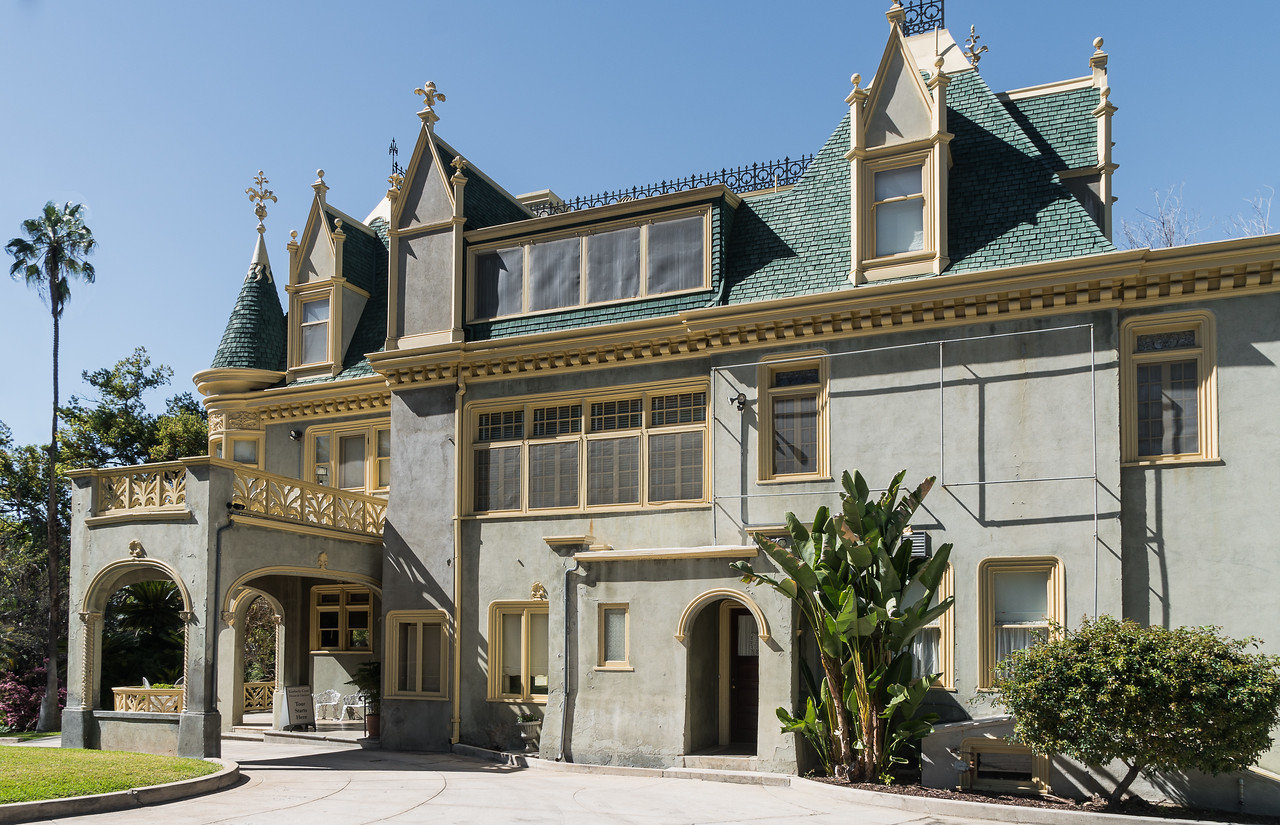 Porte-cochere and the formal entrance to Kimberly Crest

Mrs. Hill, a well traveled and wealthy widow, was from upstate New York.  Having lost her husband and four adult daughters to tuberculosis, she purchased land in California as a refuge, at least that’s my interpretation.

She didn’t long hold the land.  Mrs. Hill sold it to wealthy businessman, J.A. Kimberly, in 1905.   He and his wife were retiring to southern California from Wisconsin.  Mr Kimberly founded Kimberly Clark, the company responsible for Kleenex and many other products.  Mrs. Kimberly created the Italian Gardens at Kimberly Crest. 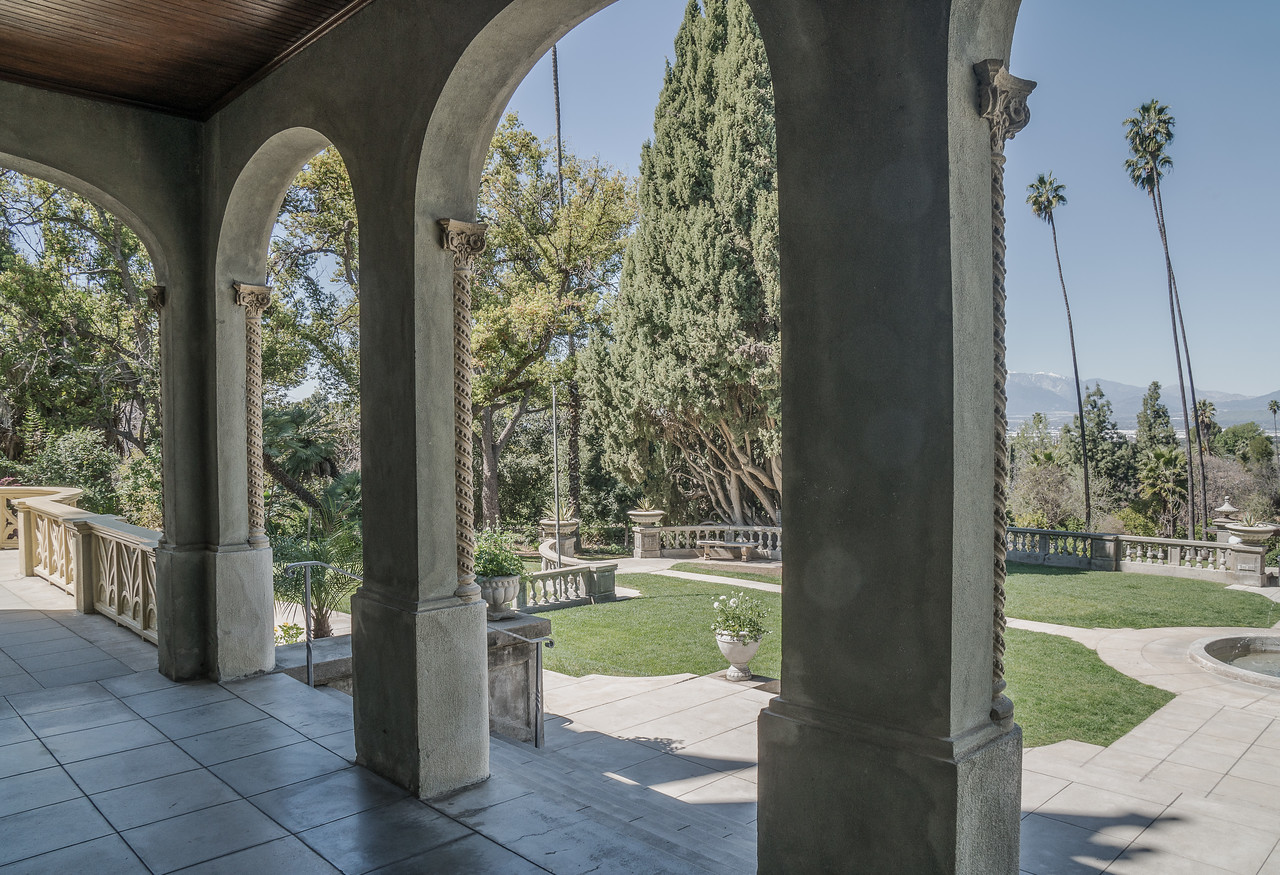 Garden at the back of Kimberly Crest

The above image is only a small part of the garden created by Mrs. Kimberly.  When she first arrived in 1905, there was nothing but dirt. Now it’s a series of terraces and small gardens.

Mrs Kimberly was very active in the Redlands community and, after her husband’s death, continued to be a force in the town.  She inherited Kimberly Crest and became the second woman to own it.  About this time. her  adult daughter, Mary Kimberly Shirk, came to live with her to keep her company. Mary had recently lost her own husband in World War I.   To console her mother, Mary created a rose garden for her. Within the garden, a boxwood hedge encircles a statue known as the Shy Girl. 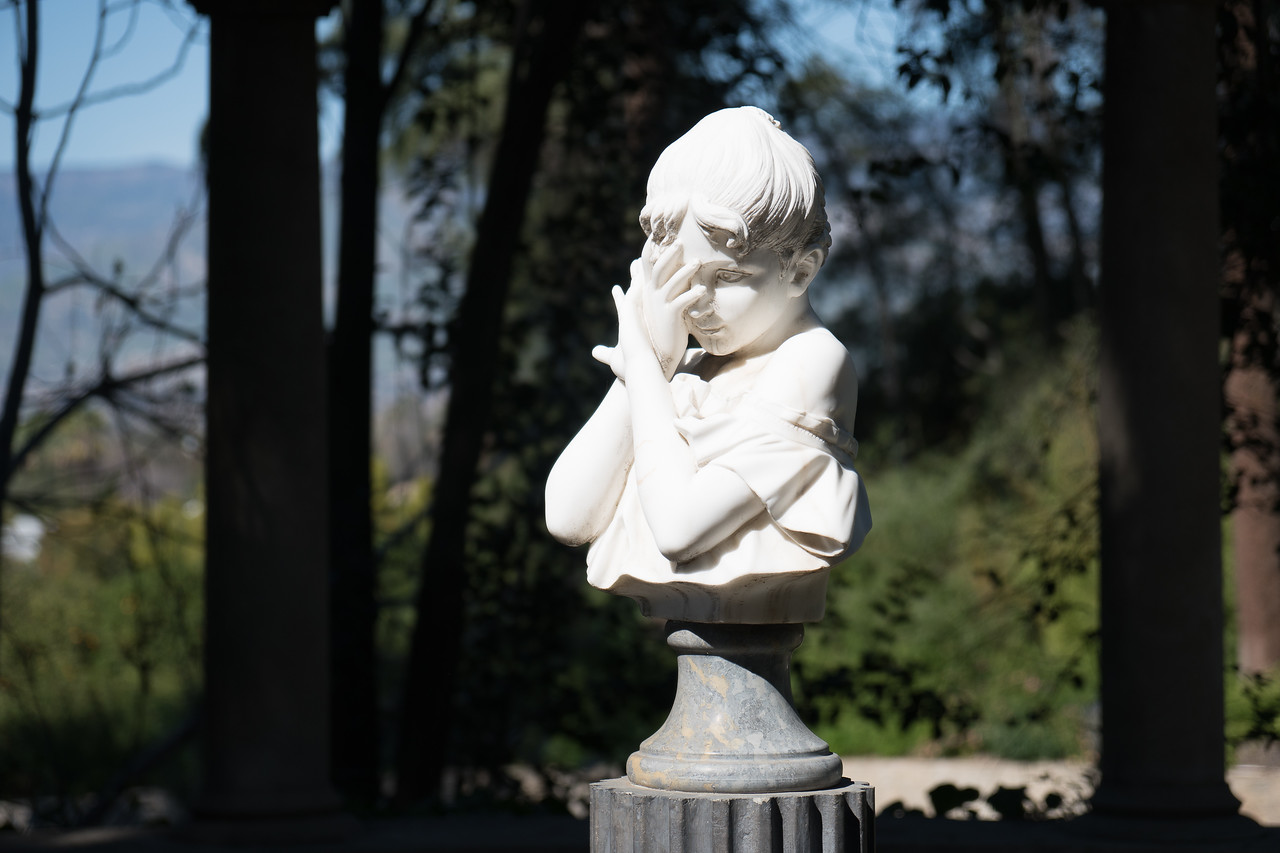 The Shy Girl at Kimberly Crest

Eventually Mary became the third strong woman to own Kimberly Crest.  Like her mother she was active in the community. The town of Redlands thought of her as a queen and she was well loved.

Thanks to Mary Shirk’s generosity the house is now owned by the people of Redlands.  The private residence became a non-profit organization. It supports itself through the moneys raised by the gift shop, various tours, and events such as weddings.  There was a wedding scheduled for the day I was there.  Chairs were being set up and guests were arriving! 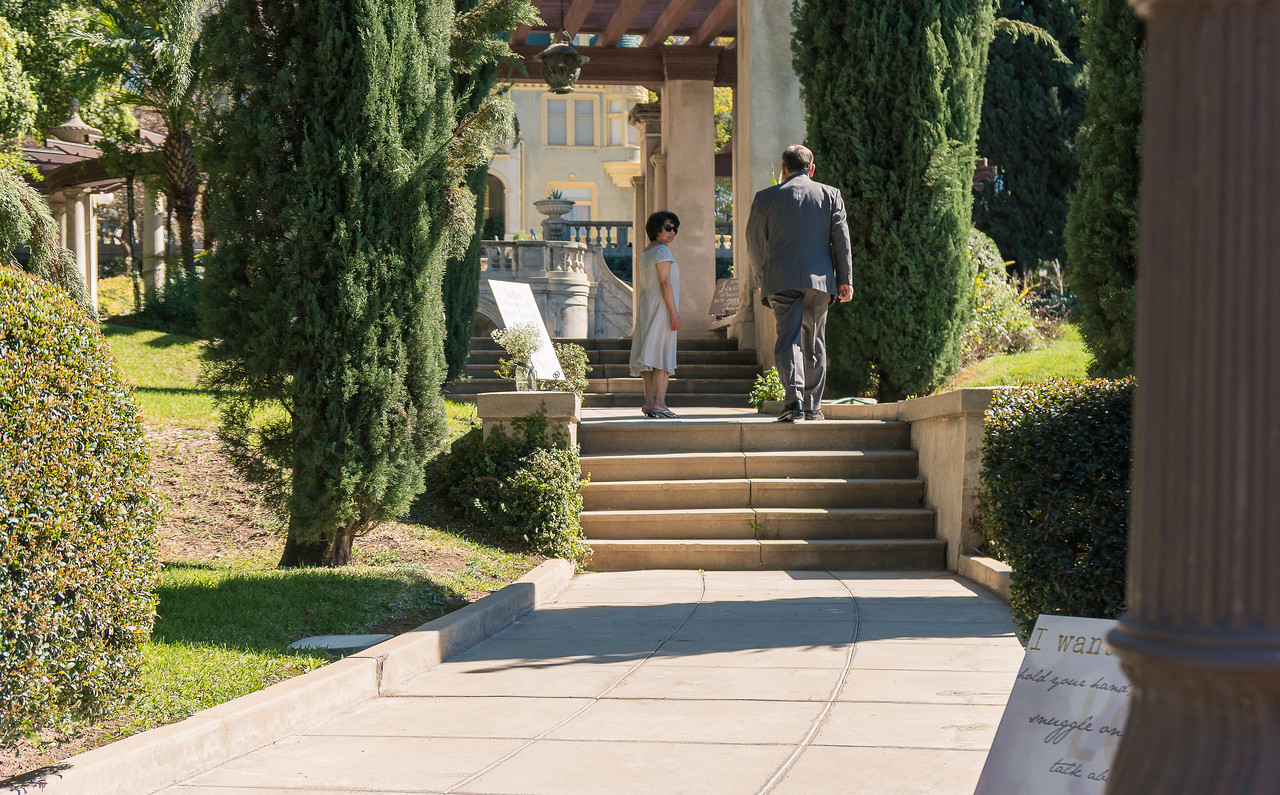 Tours of the house are available on the weekends–Friday through Sunday–in the afternoon.  You may photograph in the gardens, but not in the house.  That’s a pity as the house is beautiful.  What a thrill to see the craftsmanship and the decor.

Note also that the house is on a hill and parking is at the foot of said hill.  That means one walks up several steps. 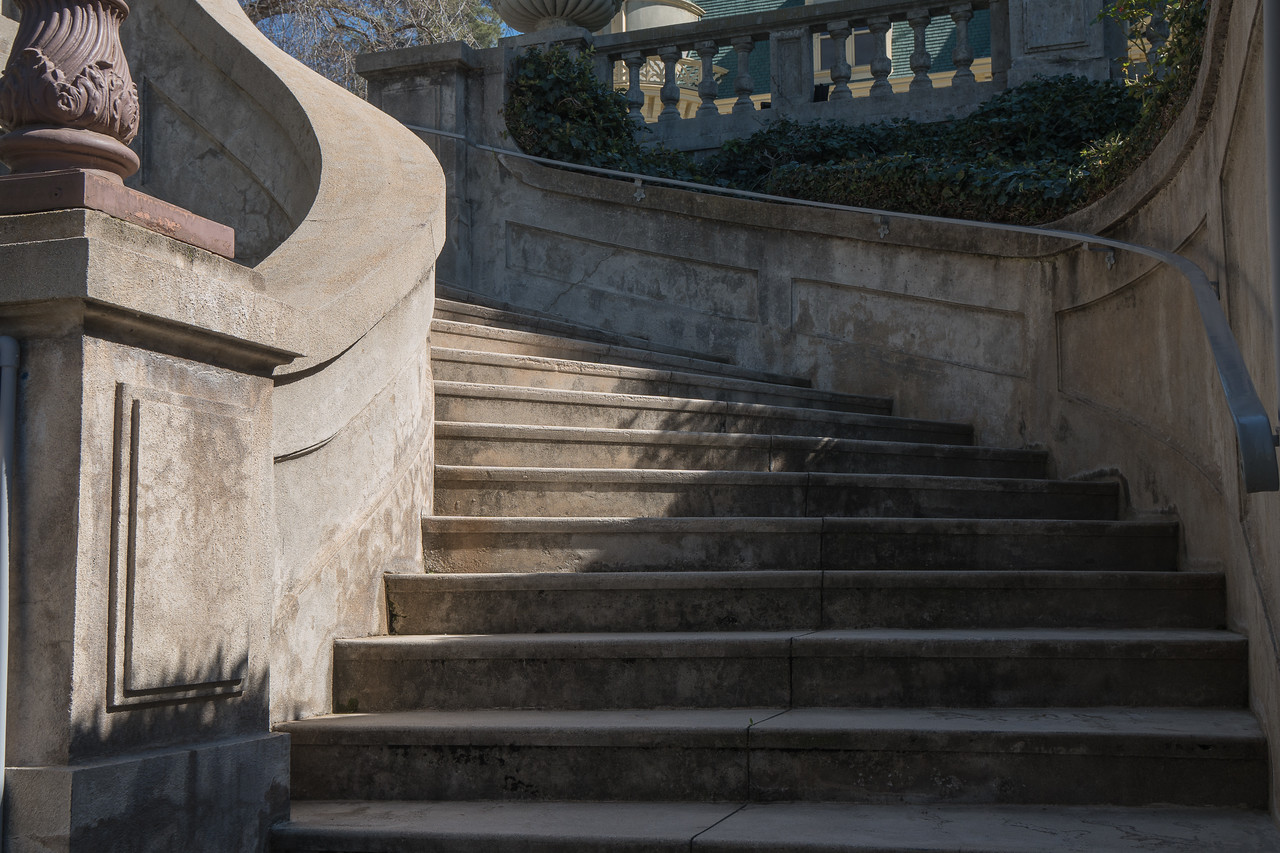 Just some of the steps at Kimberly Crest

I think it’s worth the climb.  Next time I’ll choose a cloudy and cooler day.  Maybe I’ll even come for one of the special tours and visit the basement and third floors!

I like the notion of stepping back in time, of exploring the history of my neighborhood.  Therefore this visit to Kimberly Crest was like reaching back and touching the past. Based on the photo below, it’s also a bit like gazing up at the castle in Disneyland! 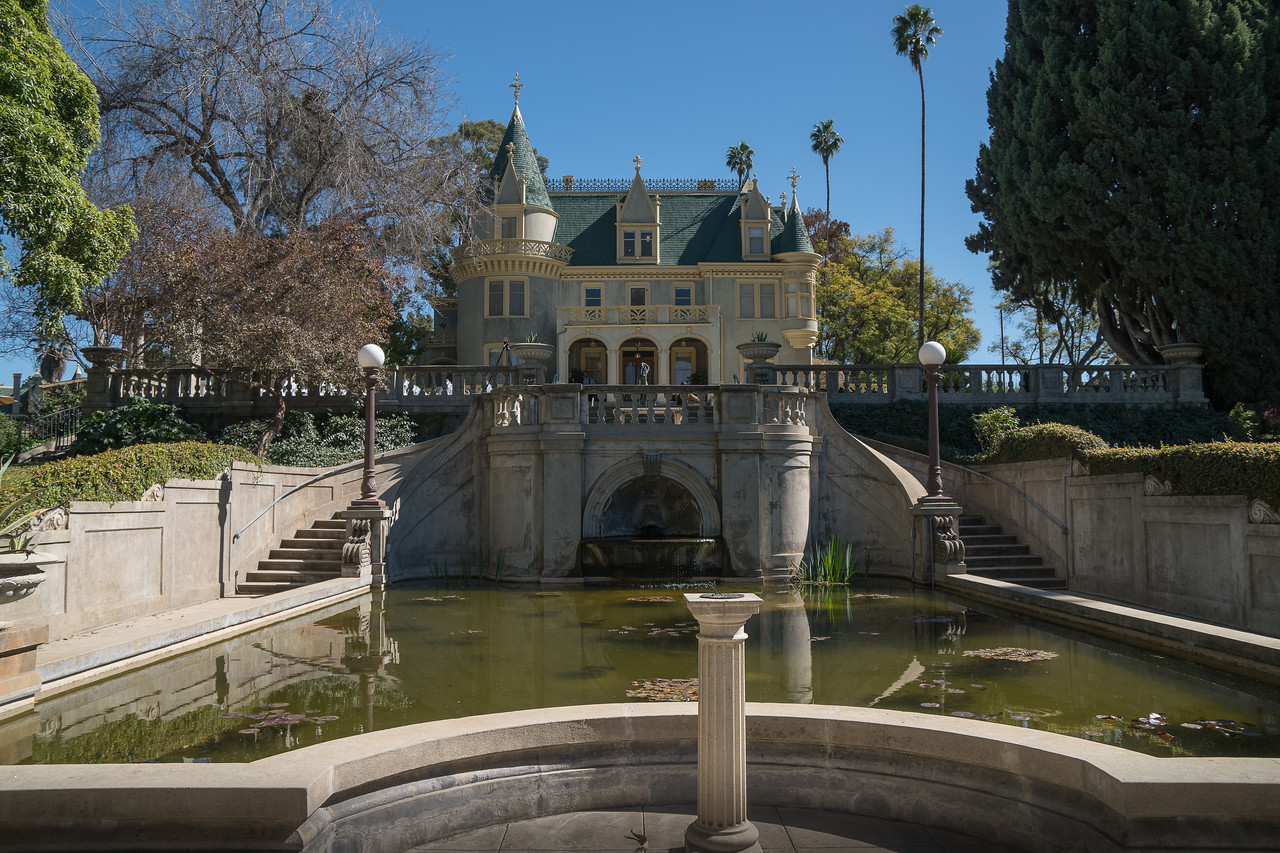 The sundial and fish pond in front of Kimberly Crest