I was recently in need of a break from my life so I booked a flight, a room and a car and headed north before it was no longer spring!  I decided that the best spot for a quick trip away was Longwood Gardens in Kennett Square, PA.  I had visited Longwood Gardens previously and was surprised that it had been 9 years, when I checked my old images.  The last time was in the fall during their chrysanthemum festival so I was looking forward to some spring flowers.   Florida’s heat and moisture does not allow for the typical spring flowers that I remember as a kid in upper state NY, such as tulips, daffodils and irises.   So I was hoping I was not too late even for PA!   Unfortunately, my timing was a bit off and I arrived just after the peak flower time but I still got to see some of my favorites and also a few new flowers!

I arrived in Philadelphia and drove to Kennett Square with enough time to spend a few hours at the gardens so I pulled my camera gear out of my bags and headed for Longwood Gardens.

That day was very sunny and actually a little warm so the lighting was not the best and the flowers were looking a bit droopy but I made the best of the afternoon.  At this point many of the flowers would be dropping their petals soon so I did not want to miss any more than I already had.

Before we go any further let me give you some background on this amazing place!

Longwood Gardens is an American botanical garden. It consists of over 1,077 acres (436 hectares; 4.36 km²) of gardens, woodlands, and meadows in Kennett Square, Pennsylvania, United States in the Brandywine Creek Valley. It is one of the premier horticultural display gardens in the United States and is open to visitors year-round to enjoy exotic plants and horticulture (both indoor and outdoor), events and performances, seasonal and themed attractions, as well as educational lectures, courses, and workshops.

Longwood Gardens has a long and varied history. For thousands of years, the native Lenni Lenape tribe fished its streams, hunted its forests, and planted its fields. Evidence of the tribe’s existence is found in quartz spear points that have been discovered on and around the property and can be found on display in the Peirce-du Pont House on the Longwood Gardens property.

In 1700, a Quaker farmer named George Peirce purchased 402 acres of this English-claimed land from William Penn’s commissioners. George’s son Joshua cleared and farmed the land and in 1730 he built the brick farmhouse that, enlarged, still stands today. In 1798, Joshua’s twin grandsons Samuel and Joshua, who had inherited the farm, actively pursued an interest in natural history and began planting an arboretum that eventually covered 15 acres. The collection included specimens that they collected from the wild as well as plants acquired from some of the region’s leading botanists.

By 1850, the arboretum boasted one of the finest collections of trees in the nation and had become a place for the locals to gather outdoors – a new concept that was sweeping America at the time. Community picnics and socials were held at Peirce’s Park in the mid to late 19th century

As the 19th century rolled into the 20th, the family’s heirs lost interest in the property and allowed the arboretum to deteriorate. The farm passed out of the family through several hands in quick succession, and a lumber mill operator was about to cut down the trees for timber in early 1906.  This threat moved Pierre S. du Pont, American entrepreneur, businessman, philanthropist, and member of the prominent du Pont family to take action. On July 20, 1906, 36-year-old du Pont purchased the farm primarily to preserve the trees. He wasn’t planning to create Longwood Gardens, but within a few years, his desire to make it a place where he could entertain his friends transformed a simple country farm into one of the country’s leading horticultural display gardens.

When Pierre du Pont died in 1954, he “had in place a well-funded yet adaptable mechanism for Longwood to continue.”

Today the 1,077- acre Longwood Gardens consists of varied outdoor gardens, ranging from formal to naturalistic in their landscape design, and 20 indoor gardens within a 4.5 acre (1.8 hectares) group of heated greenhouses. Longwood’s Conservatory contains 4,600 different types of plants and trees, as well as fountains.[10] The Gardens also has extensive educational programs including a tuition-free two-year school of professional horticulture, a graduate program, and extensive internships  It hosts hundreds of horticultural and performing arts events each year, from flower shows, gardening demonstrations, courses, and children’s programs to concerts, organ and carillon recitals, musical theatre, fountain shows, and fireworks displays. It also hosts an extensive Christmas light display during the holiday season.

The Gardens have attracted more than 1 million visitors a year since 2012. Plans for growth and expansion for the next four decades began in 2010 with the hiring of West 8, a Dutch landscape architecture and urban planning firm with headquarters in Rotterdam and an office in New York City. The founder of West 8, Adriaan Geuze, stated their mission is: “to celebrate Longwood, enjoy it, keep it, preserve it, while asking how it could function as a spectacular place for larger groups of people in the 21st century.” The comprehensive Longwood plan is now complete and the first major project in the plan, the revitalization of the Main Fountain Garden, began in 2014. 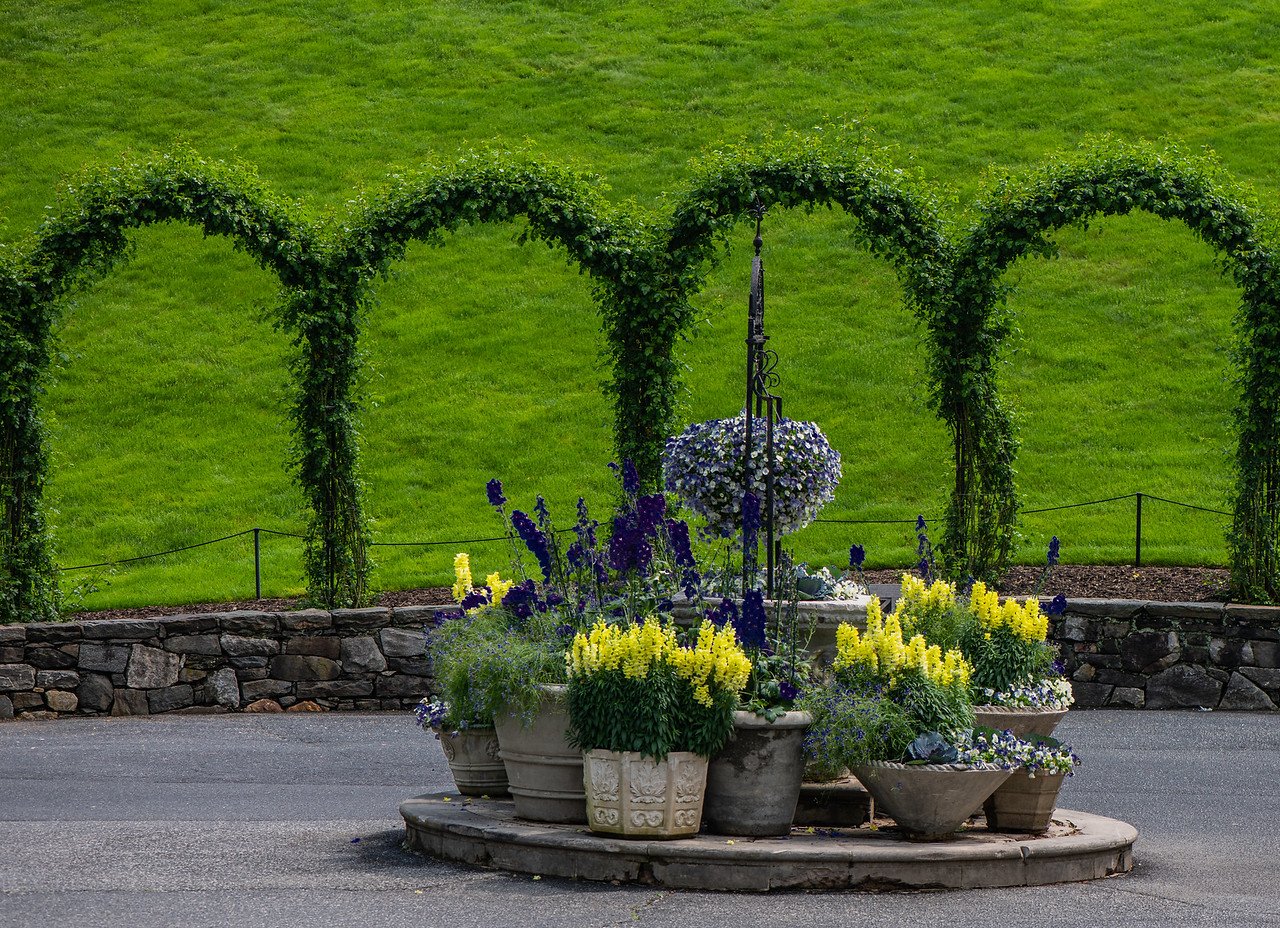 One of the Many Focal Points

I walked around the gardens and the colors were amazing!  The Columbines, a flower I had never experienced before, were in full bloom in multiple versions. 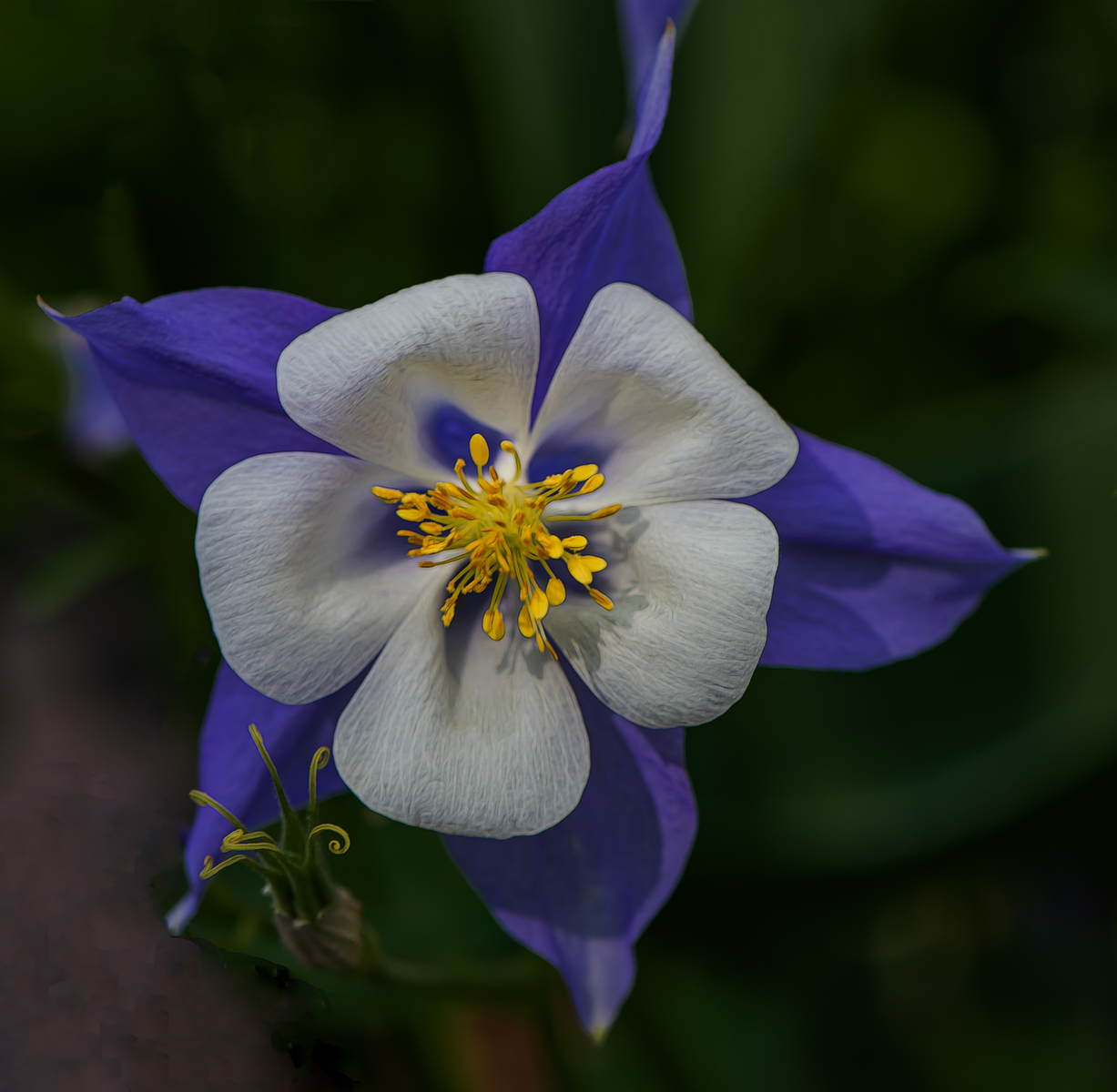 The daffodils were all gone but there were still some tulips scattered along the garden walkways.

Inside the very large conservatory the flowers were everywhere.  There is a variety of rooms with different types of plants/habitats, such as orchids, palms, tropicals, desert, etc.

One view (of many) of the conservatory

They also have some of the greenhouses open so you can see how they propagate and grow their plants.  The flowers inside were numerous and of great variety.

One of many amazing orchids

There are a number of fountain areas, the Italian fountain was a perfect subject for my infrared converted camera! 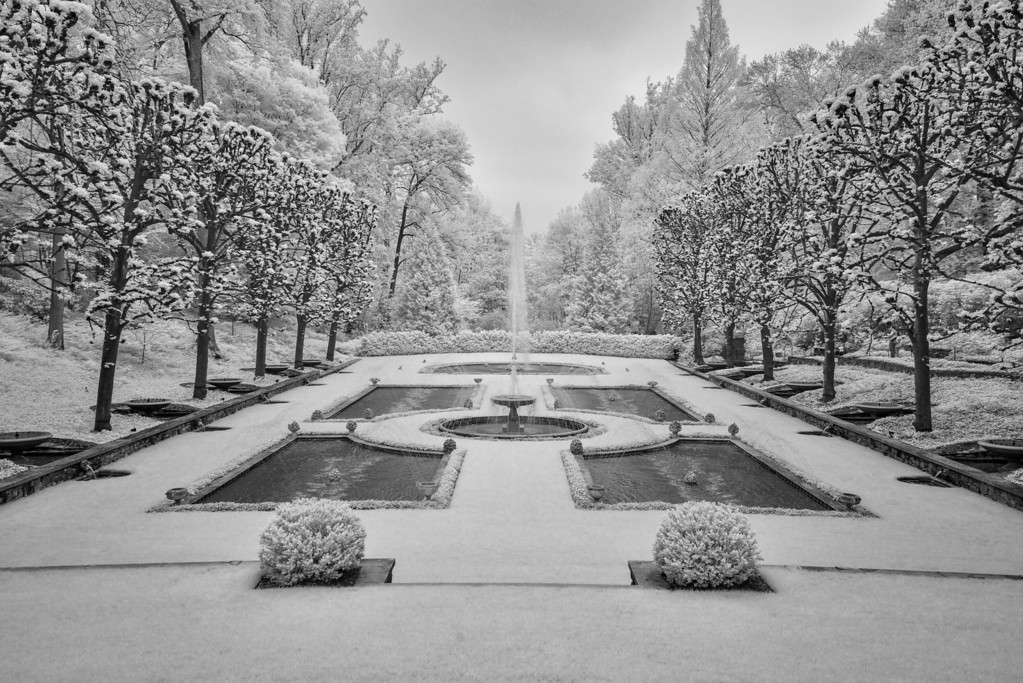 There are many trails and paths through the various types of habitat and gardens.   There are woods and a large meadow. 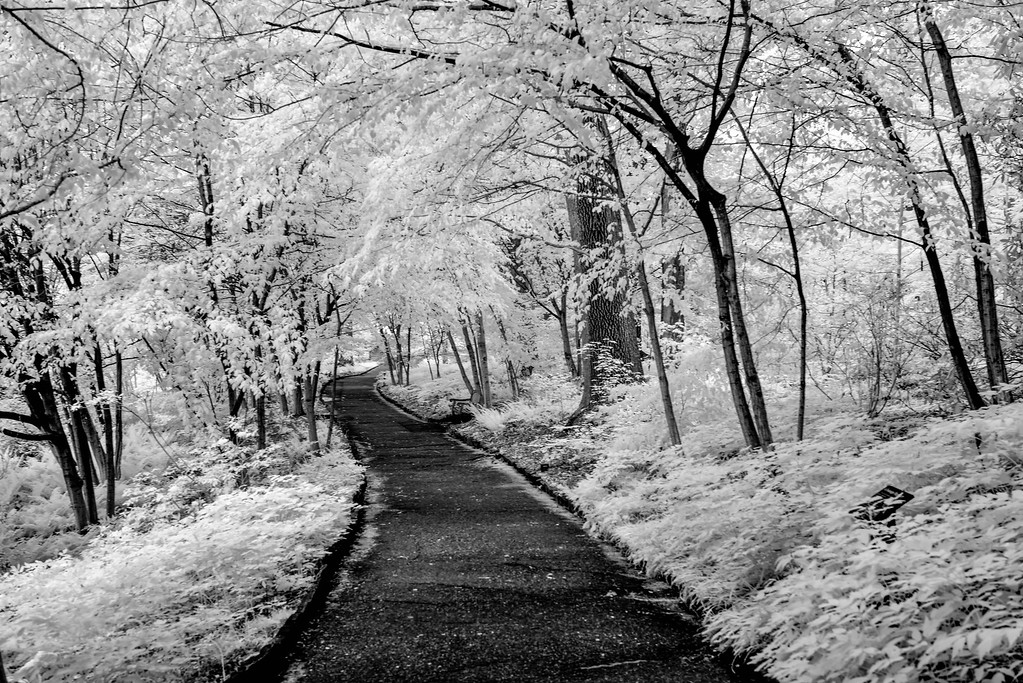 Path through the woods

There are several lakes and ponds.  One of the bigger ones has a beautiful gazebo at one end.

Gazebo by the Water

The second day of my visit it was overcast, which is great for photographing flowers!  The colors were more intense, there were less shadows, there were water drops and the flowers were less droopy (it had rained overnight!).

Tulip after the Rain

I went through the conservatory again as the overcast light made the lighting better inside as well! 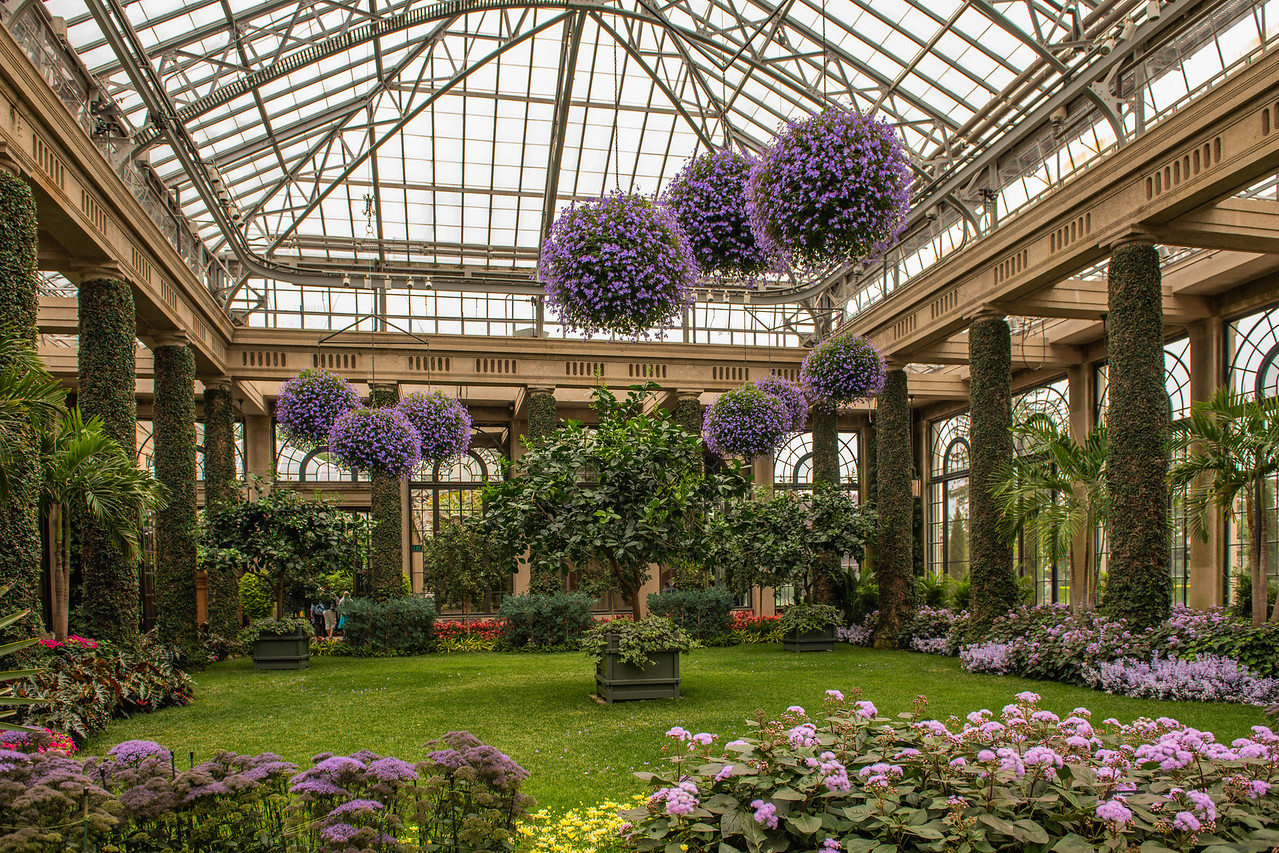 If you are in the Philadelphia area, I highly recommend a stop at Longwood Gardens!  It will be a great day outside and there are different flowers for each season!

Checkout Part 2 coming soon about the wonderful fountain & light show I saw the first night I was visiting the gardens.

Checkout my gallery for these and many more images from the 2 amazing days at Longwood Gardens.