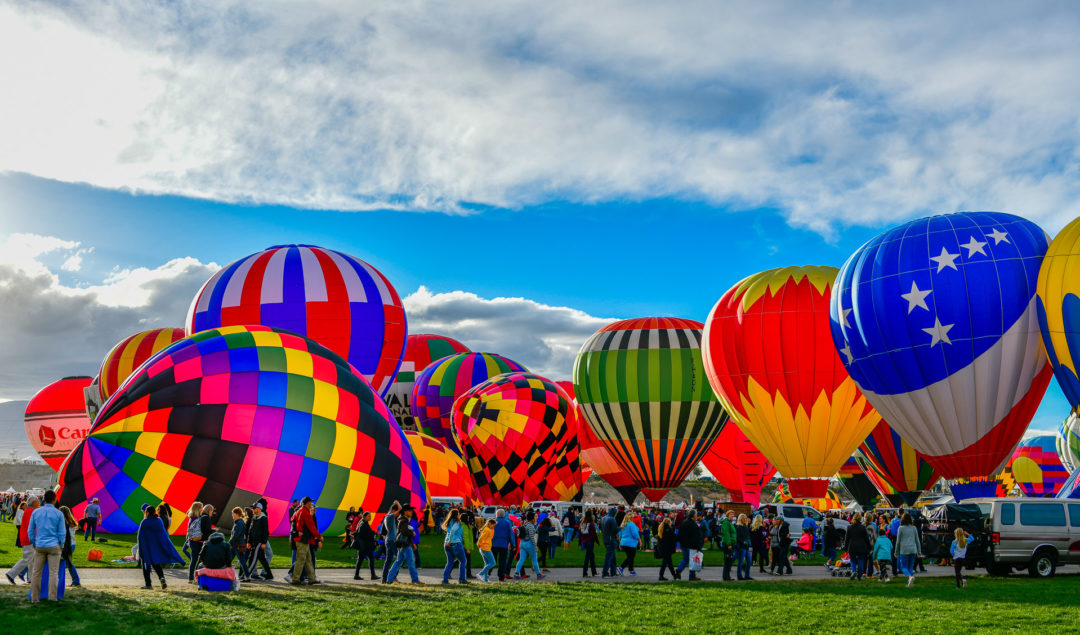 The primary reason we were in New Mexico in October was to see and photograph the Albuquerque International Hot Air Balloon Fiesta. On opening day we got up early in the morning, packed up and started the drive to Albuquerque from our rental house in Cochiti.

We were very disappointed when we got stuck on the Interstate with a huge back-up so that we never made it to the fiesta grounds. We watched the lift-off of the balloons from the distance. That day, there was some unexplained problem with the massive parking area logistics. A police officer we ran into later told us she did not even know what happened and was very late to work! So we circumvented the fiesta grounds and tried to find another place to stop.

We finally found a spot and pulled out the cameras and caught a few images as the balloons flew away. Jim decided we should chase a couple of the balloons that were heading away from downtown so we hopped into the car. We ended up in a housing development on a plateau.

A couple of pilots started to land so we watched as they brought the balloons in. Their chase crews went to work getting them to an area (the dirt road) where they could lay the balloons down and start the process of packing up.

We got to speak briefly to one of the pilots. Jim used to be a balloon pilot years ago so they shared stories. Afterward, we moved onto some other sights in the area. But we decided to give the fiesta another try the next day!

The next morning we got up even earlier and headed for Albuquerque. This time there was no traffic back up and we got into the parking area around 5 AM. We ended up in the very first row of cars! Jim & I decided to take a nap while the other photographer in the group decided to see what he could see on the grounds. As I sat there trying to sleep I could see more and more vehicles pulling into the exhibitors’ gate with balloon trailers so I was getting excited to see the lift-off! Finally, just before dawn, we made our way into the fiesta grounds and there was a huge crowd already! This is one of the only hot balloon festivals that allow the crowds on the field as the balloons are laid out and inflated. There were a few on the field that were inflated doing what is called “balloon glow”. They fire up the burner to light up the inside of the balloon while it is still dark out as a site for the onlookers. These are especially fun to photograph.

They often do this en-masse at night, without lifting off, as entertainment for the crowds. This morning though a few were up and these are usually what they call Dawn Patrol. These pilots have lights on their balloons and go up first to test the winds and also, I am sure, as a draw for more people to the fiesta! In the meantime, small test balloons were sent up to check the winds before even the Dawn Patrol could go up.

This morning many of the pilots were testing their burners, which, per Jim, some of them are required to do for their pre-flight checklists, but at precisely 7 AM all of the pilots turned on their burners for a great show! Jim said this was not a good sign as they were using fuel they would need to fly! He said that this indicated that they would not fly. We checked with one of the crews and were told that the winds aloft were too high for safe flying.

We were very disappointed again BUT we made the best of it as we got to see and photograph something that does not happen when the normal “mass” liftoff takes place in waves, all the balloons inflated pretty much at the same time!

Our biggest problem was the crowds and vehicles all over the place. So I changed lenses to my wide-angle and my telephoto. I looked for balloons touching or in groups. Also, the crews were great about letting us get right up to the basket as they inflated with their huge fans (staying away from the fans, of course) and even when they used the burner once the balloon was going upright!

We spent a couple of hours wandering around the grounds as balloons were inflated and deflated.

We finally decided to head over to the “mid-way” section of the fiesta to get something to eat and I wanted to get a fiesta pin. Within the 30 minutes or so that I was getting through the line to get my pin and T-shirt, the surface winds kicked up and all the balloons were deflated and quickly packed away by the chase crews who never got to “chase” that day!

We had much more to do and see around Albuquerque and New Mexico so we said our goodbyes to the Albuquerque International Hot Air Balloon Fiesta!

The bad luck we had was not the norm! I highly recommend a visit to this fiesta! The fiesta goes on for a week with a couple of days of mass liftoffs, several days of pilot competitions and a night or two of balloon glows. The fiesta draws balloons, pilots and spectators from all over the world. Be prepared for large crowds at the fiesta, at the restaurants, hotels and other attractions and landmarks in the area.

The Albuquerque International Hot Air Balloon Fiesta website has a lot of info.

Please check out my gallery for these and many more images from Albuquerque International Hot Air Balloon Fiesta.

That is all for now. New Mexico – Part 3 coming soon.