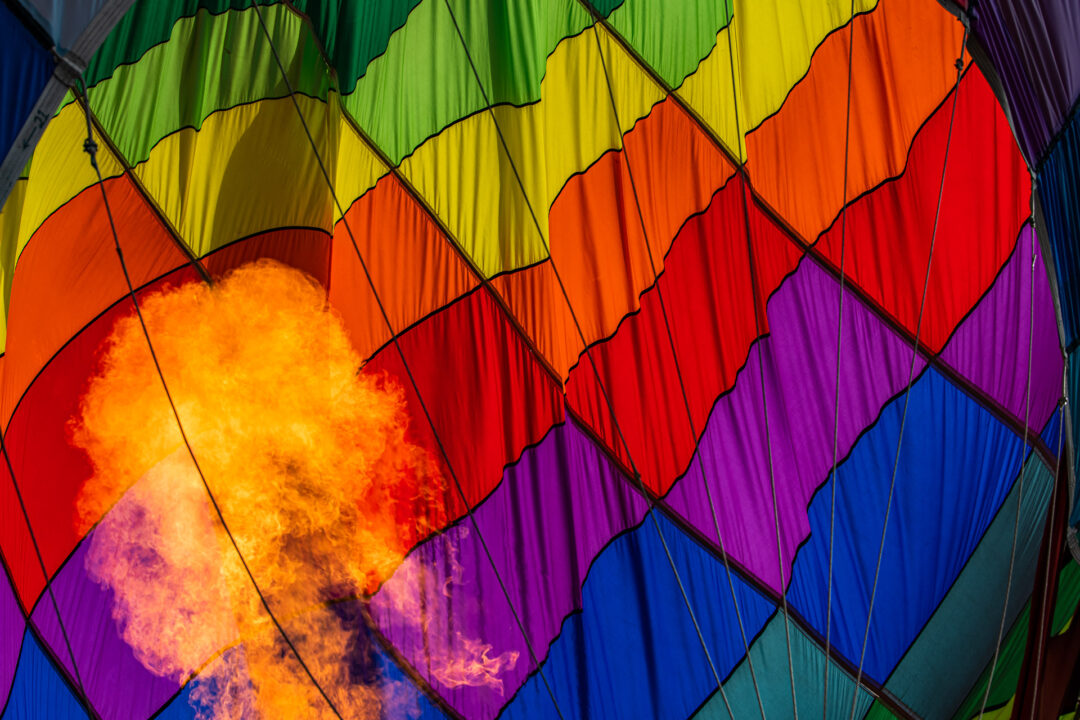 On the first day of the Albuquerque International Balloon Fiesta, we got up very early, loaded up the vehicle, and started the drive out of the mountains. As we drove we ran into a heavy fog…

which Jim said was a bit unusual but since we were in the mountains it should not be an issue. Jim explained that the weather this time of year was the reason the balloon festival was held here as the winds blew in the direction that the pilots want to go due to the shape of the valley that Albuquerque sits in!

We arrived very early but there were still hundreds of cars ahead of us driving into the parking lots surrounding the festival grounds. As we walked through the entrance gate, we saw that the Dawn Patrol balloons had been launched. These pilots are qualified to fly in the predawn. They go up to test the winds and let the officials on the ground (called Zebras, due to their very noticeable black and white outfits) know what the conditions are.

These balloons have lights hanging from the baskets as they launch in the dark! The conditions must be right for the mass launch to take place.

As the light of the day came up a group of about twenty balloons was launched so we were hopeful for a full mass launch!

But Jim (our retired balloon pilot) immediately said there was a problem as the balloons were going in a direction that they normally did not go. We also noticed that the bank of fog we had driven through in the mountains was getting closer as the light came up from the rising sun!

The crews tested their burners as they waited for their turn to inflate.

The next line of balloons that would be launched had inflated and were waiting for a signal from the Zebras.

The crews and crowds were hopeful that the fog would blow on by and that the launch could continue but that was not to be!

We watched as the Zebras made their way through the crowds to the crews and we realized that the launch had been cancelled.

So as they did last year, the crews began inflating their balloons for a grand display on the field.

We decided to make our way through the field and make the best of the massive gathering of these beautiful balloons.

As we walked along I was glad I had once again brought both my telephoto and wide angle lenses.

Then suddenly the whole field was enveloped in a heavy fog. The Zebras had been correct in stopping the mass launch! The pilots must have a certain distance of visibility to be safe and this fog was definitely making that impossible.

One of the truly best things about this festival is the wonderful ballon crews. This festival allows the crowds on the launch field and the crews let you get right up to the basket as the balloons are inflated. Jim had warned us about staying clear of the balloon lines and the giant fans that are used to do the initial inflating. The crews were happy to let us photograph the inflation process and answered our questions. Some were even telling us to get closer to get an even more dramatic image.

Some of the crews even have trading cards for their balloons that they give out for the asking!

We continued to walk through the field to find more compelling compositions.

That is not easy with everything, including balloons, people, vehicles and trailers so closing packed!

With the sun rising a bit higher there were shadows we could look for!

The crews had started to deflate the balloons so we decided it was time to make our way back to the rest of our group. I wanted to stop by the fair-like midway to buy a Fiesta pin and t-shirt. But I had to make one more image!

Once again (see my 2018 post on the fiesta) we did not get to see the mass launch…) am I a jinx? But since the officials and crews know that we would all be disappointed otherwise, they put on a pretty good show even without the full launch!

We made the long walk back to the vehicle and decided to head to Wagners Farmers Market for a few images and some lunch.

For more info on the Albuquerque International Balloon Fiesta 2021 please check out their website. DUE TO THE CORONAVIRUS PANDEMIC THE 2020 FESTIVAL HAS BEEN CANCELLED.

My next blog will be on our next stop, San Ysidro Catholic Church, a historic chapel in Corrales, New Mexico.

For a larger version of the images, please click on the image or visit my gallery for these and many more images from the Albuquerque International Balloon Fiesta.