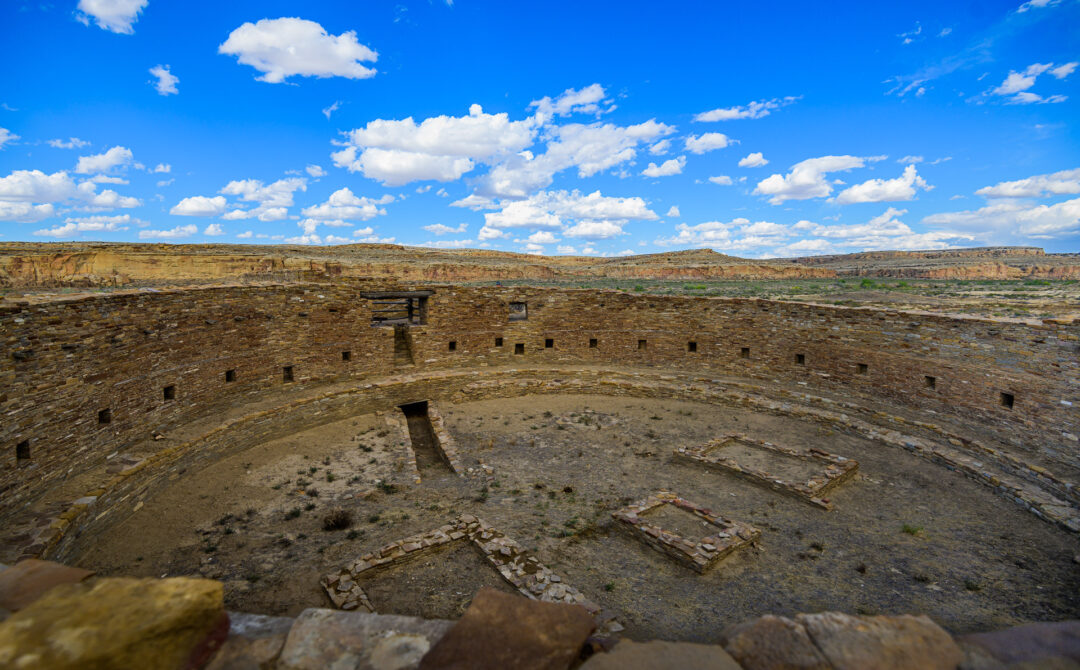 On our final full day in New Mexico, we got up very early, piled into our vehicle, and headed to Chaco Culture National Historic Park in northwest NM. Having been there twice before, I was still looking forward to…

visiting one of my favorite places in New Mexico.

The access road to the park is not paved so be prepared for a long bumpy ride. A truck or SUV would be the best for this visit. Also, you will be driving across Navaho Nation lands, so be mindful of their laws and rules.

At the entrance to the park, the road is paved, bringing you to branches that go over to the campgrounds and the Visitor Center. You must check-in at the Visitor Center to pay the park fee (Annual and Lifetime National Park passes are accepted). Take advantage of the information and hospitality of the rangers and workers in the center. There are displays, a museum, and gift shop as well as restrooms and picnic pavilions.

We checked in and spent a few minutes talking to the folks in the visitor center. We found out they were putting on an Astronomy lecture that night so we added that to our agenda for the day.

The first thing you see is the Fajada Butte as you enter the park. So we had to get some images of it while the clouds were so beautiful. The clouds move through the valley pretty fast so take advantage of them when you can.

We decided to make our way around the 9-mile loop road and visit as many of the ruin sites as we could. The first humans were in this area in 900 BC! There is a tremendous amount of historical information including PDFs you can print out on the Chaco Canyon website.

All of the pueblo sites are amazing. The large kivas that were built into the ground and are lined up with such precision are my favorite spots.

In the area around Casa Rinconada we looked for shards of ancient pottery. It was not easy but we did find some pieces that had notches cut into the clay or the remnants of white designs. You cannot remove any of the artifacts so we left them where we found them but it was so amazing to hold something that was made by humans so long ago!

We followed the loop road around to Hungo Pavi, the site of an unexcavated great house. There is a long wall standing with a number of holes. I stopped to shoot through some of the ancient “windows” that look out onto Chaco Canyon.

We skipped Pueblo Bonito as we were saving that site for later in the day!

We next visited Chetro Ketl where there is quite a bit excavated so it is easy to see the extent of the 2nd largest great house and the great kiva and elevated kivas.

Many of the archaeological sites have been excavated, recorded, and reburied for their protection. Those that are open for visits are spectacular.

We found a raven that was sitting by the parking lot waiting to have its picture taken. I know it was looking for a handout but it only got a portrait from me!

As the sun started to go down we made our last stop on the loop road (we actually went around a couple of times as we went to the sites out of order). We stopped at Pueblo Bonito as that site is vast and is the best spot to be as the sun gets low in the sky.

These are large ruins that are connected by doors that are lined up with each other. The doors are somewhat small so I was glad I had switched from a backpack to my many pocketed vest. My backpack was problematic the last two times we were here. The doorways are small and low so it is best to have the smallest profile that you can manage and be prepared to bend down.

As the sun went down the light flowed into the pueblo rooms since there are no ceilings left and gave different shades of light as it reflected from the stone walls.

As the sun got lower and the light more golden I moved to another section of the pueblo.

This view gave me more doors but the light was still not doing the trick. So I made my way through the many doors and set up my tripod one more time facing the direction of the setting sun! The light was perfect!

Once I made my way out of the last 2 doors, the smallest by the way, I was able to take in the vastness of the pueblo ruins.

But then that miracle of late light happened and we were in the most advantageous spot for it.

That brief moment as the sun was about to drop below the canyon walls on the other side, it lit up the canyon wall on this side, lighting up those ancient window openings! It was spectacular!

We continued on around the loop as we knew that the loop road was about to close. We stretched our luck a bit as the sky was giving us some amazing colors as the sun was setting!

We gathered up our picnic dinner and headed over to the seating area where the Night Sky Program is given. We scored some great seats and sat down to enjoy our food. As the darkness came the seating filled up and we were thrilled to see that those beautiful clouds were all gone now! The rangers and astronomers had set up several telescopes so we were able to see the moon and several constellations that can be seen over Chaco Culture National Historic Park.

The rangers gave a terrific night sky program and gave us more opportunities to check out the telescopes and their small observatory.

While most of the visitors and staff left, in the pitch dark we pulled out our tripods and cameras and set up at the edge of the parking lot (this is allowed) so we could try for the Milky Way again.

The moon was even brighter than the night before at Ghost Ranch but we still had to try! I tried getting a shot over the Fajada Butte but the moon just blasted too much light in that direction! This was the best I could get for the Galactic Center of the Milky Way.

But as always, I turned around to see what was there and found that the tail of the Milky Way was somewhat visible with another butte in the foreground so I concentrated on getting this image.

This was a long exposure and the butte was entirely lit up by the moonlight! I was lucky to catch a short shooting star!

We definitely need to come back to this so very clear sky area when there is no moonlight!

Chaco Culture National Historic Park is a must-see if you are in New Mexico! I have been there three times and I have seen and shot different things each time and have improved on some of the same things I have shot before!

I would recommend checking their website for the incredible history, locations, schedules, restrictions due to COVID-19 and fire season. But bring your hiking shoes, water, camera…oh yes, and preferably a truck for that entrance road and enjoy some insight into some of the amazing original people of our great country.

In the dark of night, we made our way back out the bumpy road… I think it was bumpier on the way out, and back to our house in the Jemez Mountains.

Our Last Day in Jemez Mountains

We spent a few hours checking to see if the aspen trees had turned a bit more the next morning. We were in luck, plus there was a fairly heavy frost on the ground to add to our last day of shooting!

We then packed up and headed for Albuquerque and the flight home to Florida!

Please click on any image for a larger version or visit my Gallery for these and additional images.

My next adventure is at a guest ranch in eastern Georgia!

This site uses Akismet to reduce spam. Learn how your comment data is processed.