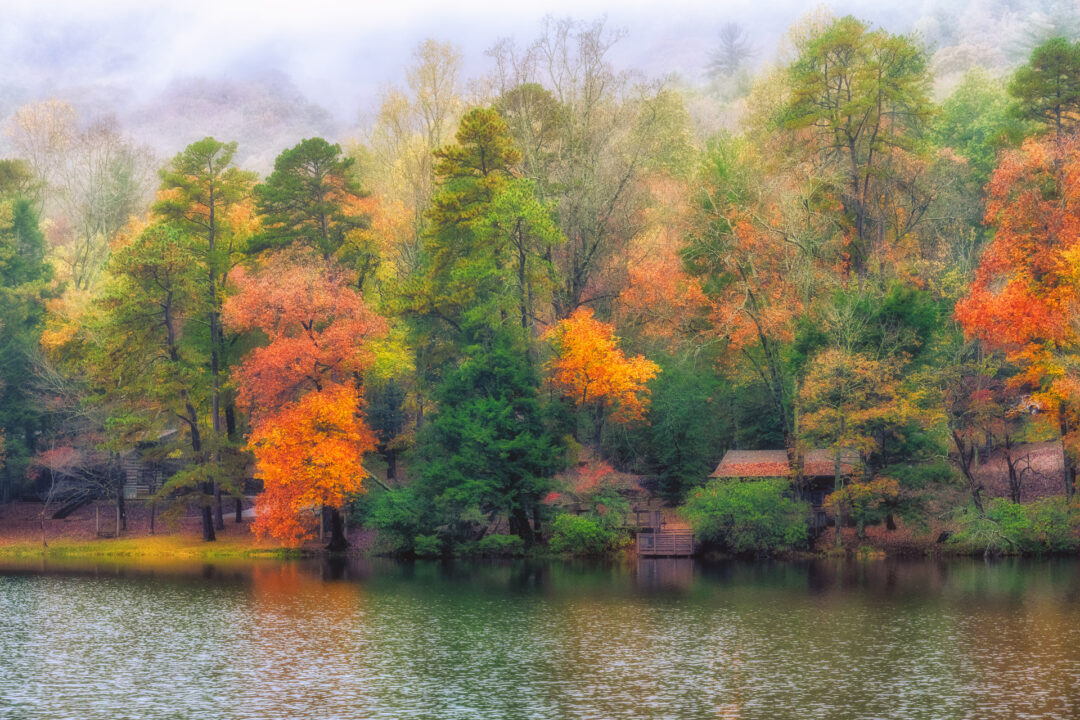 2020 was one of those years! A couple of my friends and I decided we needed a few days away from home, out in nature for some fall color, so we booked a house in Blairsville, GA. As two of us prepared to fly to Atlanta and then drive a rental SUV to Blairsville, Hurricane Zeta was doing its thing in the Gulf of Mexico. We thought…

we were flying away from its path but that was not the case!

We arrived in Blairsville and met up with the third friend who had been up there for a few days already. Our base was a beautiful stone and log cabin out on an unpaved road in the forest.

We decided to visit a nearby park as we had some time before it got dark. Vogel State Park was not far from where the unpaved road joined the paved highway.

When we first arrived the sky was overcast but the water on the lake was smooth so we started shooting!

The falls colors were sparse but we walked all around the lake to find the best shots!

We did finally find one tree that was bright red/orange!

We saw our first waterfall here.

And found one more image of that red tree from the other side of the lake.

The wind started to pick up so we decided it was time to head to the grocery store and dinner.

A Bit of Wind and Rain

That night the remnants of Tropical Storm Zeta came through the area. We were lucky as the power stayed on and there were no downed trees or damage to the house. But that was not the case all around us!

We had slept in a bit since the weather was so bad but we decided to drive over to Amicalola Falls State Park. The drive there was not what we expected. There were trees and wires down all over the place. We found where trees had been cut right at the edge of the road so that vehicles could get by. We ran into 2-3 spots where there was only one lane open. If we had left earlier we would have been stuck somewhere waiting for the road to be unblocked! I was happy the GA state or county road crews had gotten out early to make the roads passable!

As we drove along the mountain and valley roads, we noticed “waterfalls” where there normally were none! Most were along stretches of road where there was no place to pull off so we had to ohh and ahh at them as we drove by! This was a forewarning of what we would see at our destination! Also, the color we had seen in the trees the day before was noticeably less!

We finally made it to Amicalola Falls State Park and were immediately told by a ranger that the water level was way up and that several trees had fallen on the trail. The trail was temporarily closed. We decided to make the best of what we could access by walking along the lower part of the falls.

We concentrated on small areas and the very fast moving water.

We followed these lower falls to an upper parking lot and realized that the trailhead from this point had been opened. We had heard chainsaws for the whole time and saw that they had been removing branches from a very large tree at the trailhead. The “swimming” area had been roped off but the perimeter trail was open. We headed up the trail.

We found several more downed trees that the rangers had removed from the trail.

The clouds were starting to break up and give us some light!

We wound around the mountain trail and finally made it to the waterfalls.

There was so much water coming over the edge! It was roaring!

From there we headed to another low falls area that our friend had seen a couple of days before! From his description, it had been a mere trickle compared to the raging water we saw!

We are always on the look out for interesting things to shoot as we drive!

The next day we decided to drive over to one of my favorite falls in GA, Anna Ruby Falls. This park has a paved trail that is moderately steep with numerous photo ops on the way up. We made some stops on the way across the mountains as the views were spectacular as the clouds lifted over the Blue Ridge Mountains!

When we arrived at Anna Ruby Falls we saw that it was also overflowing with the extra water from Zeta!

As we approached the big falls at the top the sound was incredible!

On our way back to the house we decided to stop at a trailhead that I had missed when I was up in North Georgia in the spring of 2019, Ravencliff Falls Trail. This is a trail with a small amount of climbing but the rocks and the roots in the trail are the biggest issue.

We decided to forego the long trail to the falls and so I concentrated on more macro type images.

We made one more stop on our way home, at Helton Creek Falls. This trail was steep, slippery and had some downed branches but the falls were worth it.

The next day we had two places to visit.

The first was a lake we had visited several years ago and I was happy to revisit. This is a lake you need to be at before the sun comes up to get the smooth water and great early light!

Winfield Scott Lake Recreation Area has a trail that goes around the lake. The last time we had stayed on the parking lot/road side so I was determined to make it all the way around.

The water was pretty smooth and the clouds were perfect as the light came up!

Since there was not much color in the trees, Super Color Infrared was the star of this day!

From this gorgeous spot we headed up into the mountains to Brasstown Bald. This is a very popular spot as it is the highest point in Georgia!

There is a large parking lot at the base where I highly recommend purchasing a ticket for the bus that takes you to the crest. There is a paved trail (which we took the last time we were there) but it is very steep and long!

Once at the crest we joined the other folks up there where I, for the very first time, was glad I had to wear a face covering! It was very windy and very cold! But the view was amazing! I don’t remember this from the last time but then I was suffering from climbing up the mountain (LOL) and my brain was not getting enough O2 at that point! This time it was exhilarating!

I had my travel tripod and both Nikon Z cameras so I set up the tripod so it would sit on the wall of the viewing platform that goes all around the roof of the visitor building. The wind was so strong I had to hold the tripod firmly!

The haze was just thick enough to give a layered look to the surrounding mountains! I love when there are layers!

One of the things I had learned about infrared back in the Grand Tetons during major fires, was that IR eliminates smoke and haze! These images were taken at the same time as the regular color images above.

We decided to walk down the trail from the crest. Going down is not as bad as going up but it can put a bit of strain on your knees and shins!

The view of the building on the crest from the parking lot! Infrared again… look at those clouds! I love wide angle!

After getting windblown, frozen and walking down the mountain, we headed back to the house.

The next morning my photog friends loaded up another friend’s car and headed back home. I had to drive the rental SUV back to Atlanta but as I usually try to do, I had some extra time before I had to get to the airport, so I stopped at Vogel State Park for one more walk around the lake.

North Georgia does not get the glory that TN and NC seem to get! I am a big fan of this mountainous lake-filled part of the state.

Spring or fall, it is a great place for making incredible images and getting a break from the flatlands of Florida!

Please click on the images for larger versions or for these and many more please visit my North Georgia 2020 Gallery.

Next up, a visit to Florida’s iconic Bok Tower Gardens.