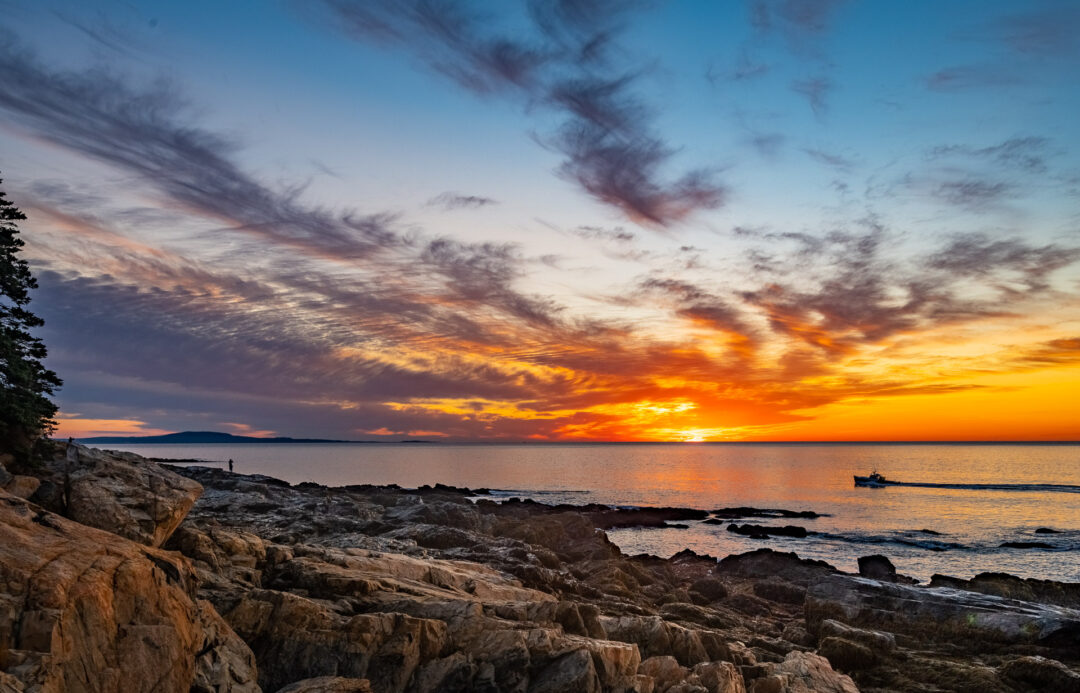 There are many spots around Acadia National Park for viewing the rocky Maine coastline but we found one we liked so much we visited for early morning and for the night sky! …

Otter Point is at the southern end of the Otter Point peninsula. Along Park Loop Road there is a parking lot to the right. Across the road, there is a trail to the rocky cliffs.

Using the “Photopills” app we determined that the sunrise could be viewed from Otter Point. So we got up early and headed over to the park, hoping for good conditions!

Using our headlamps we made our way down the trail to the cliff edge. We each found a spot we thought would give us the best view of the sunrise. I set up my tripod and camera and proceeded to jump around to keep warm! It was cold out there!

As the sun started to rise I started shooting.

At one point a lobster boat came into view at the same time as a person had walked out onto the cliffs further down the coast. This was my favorite image from Otter Point. There were just enough clouds to add interest and even more color to this colorful sunrise!

As the sun rose and threw more light on the coast I turned around (always remember to turn around!) to see how the shoreline behind me and the peninsula across Otter Cove were looking.

I turned back to the sunrise to catch it as it was just above the horizon.

I turned back around again to catch this strange line of light that I assumed was caused by the clouds. The light changes quickly so you and your camera need to be on a bit of a swivel-head.

Side Stop and More

The light was getting too harsh so we decided to drive a bit further along Park Loop Road. We stopped at Little Hunters Beach where the rocks are very round. It is quite a challenge to walk around this “beach”!

From there we checked on a few more locations but they were very crowded so we stopped for some lunch. After lunch, we headed to a part of Acadia that I had not visited before (which will be the subject of an upcoming blog).

We had a fantastic dinner at Abel’s Lobster Pound, this time full lobsters, although I “cheated” and had a Lazy Man’s Lobster…already out of the shell. The tables were all outside and the view of the adjacent harbor at sunset was wonderful.

Looking at the weather while we were eating, we realized we were going to have another clear sky night. We decided we wanted to try shooting the Milky Way again, but where? Otter Point came up and we decided we would go back there and see what we could get.

“Photopills” again gave us the information we needed to determine where the Milky Way would be visible.

We headed back to Otter Point, put those headlamps on again, and took the trail out to the cliffs. The Milky Way was visible in the opposite direction of the sunrise so we were looking over Otter Cove and the shore in the distance.

With my 14mm Rokinon lens on my camera and on the tripod and 20-second exposures, I was able to capture the Milky Way.

I shot from this spot for a few minutes and then decided to take the trail back along the cliff to try to get another view.

The trees are right up to the edge along the trail so I used them as a frame for a slightly different look.

It was very cold again so we lasted as long as Floridians could last out there and then gathered up the group in the dark and headed back to the SUV.

Upon arriving back at the house, downloading our images, and taking a look at what we had, we decided that this had been our best day, so far! Our afternoon stop (upcoming blog) was so awesome we decided to go back there again (ended up going back two more times)!

Otter Point (not to be confused with Otter Cliff Overlook) is a slightly out-of-way gem of a location in Acadia National Park. Get up early and see a great sunrise and/or check out the night sky.

Please click on any image for a larger view or visit my gallery to see these and additional images. Otter Point Gallery

My next blog will be on the very popular Jordan Pond.