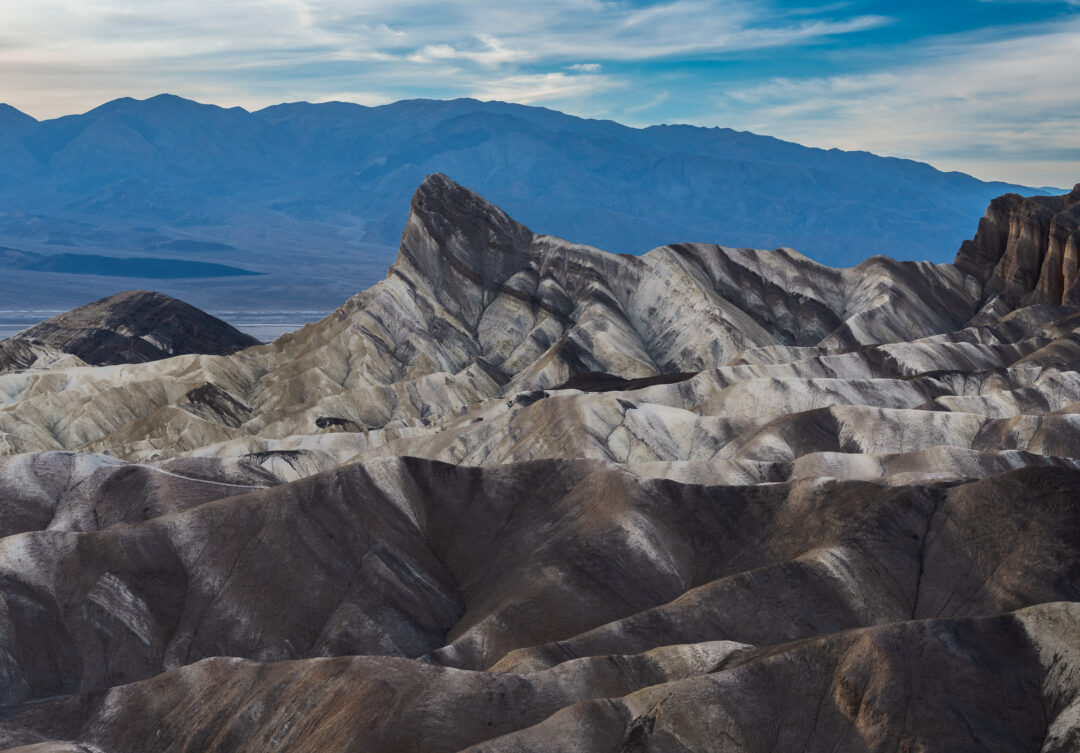 Our late-afternoon destination was not far from The Ranch in Death Valley.  Zabriskie Point is one of the more popular locations, partly because it has a relatively large parking lot and even a restroom!  It has been used as background in many movies and TV shows.

Our two instructors for this location, Colleen Miniuk, and Michael E Gordon, had given us the lowdown on this site.  It is the best shot in the AM but we were going to see what we could make of it at sunset!

Colleen is a friend and mentor.  She teaches her students to be in the moment and to “see” an image and even “title” it before making it!

Michael has been doing photography and studying in Death Valley National Park for many years, so he knows it well!

First, Some Details from Wikipedia

Zabriskie Point is a part of the Amargosa Range located east of Death Valley in Death Valley National Park in California, United States, noted for its erosional landscape. It is composed of sediments from Furnace Creek Lake, which dried up 5 million years ago—long before Death Valley came into existence.

The location was named after Christian Brevoort Zabriskie, vice-president and general manager of the Pacific Coast Borax Company in the early 20th century. The company’s twenty-mule teams were used to transport borax from its mining operations in Death Valley.

In the late afternoon, we drove the short distance to the Zabriskie Point Viewing Area parking lot. We loaded up our backpacks and headed up the somewhat steep incline (paved) that takes you up to the full view of Zabriskie Point.

There is a sidewalk along the barrier wall at the top of the incline but many of us dropped down onto the path that goes from that area to the large cliffs that are beyond and below the viewing area.

From the cliffs below the viewing area, we were facing west so as you can see the light would have been awesome in the morning!  Maybe next time!  Anyway…I proceeded to make the best of what we had.

Keeping Colleen’s suggestions in mind I set up my tripod and started looking around.  I tried to take in all that I was seeing first.  Then, with the telephoto lens, I looked around again as that narrowed my point of view.  My first pre-titled image was “Chocolate Sundae”!

As I moved the telephoto lens around, a path across the ridges stood out to me, so the next pre-titled image was “Path to Raven Wing”.  Not a place, just what I saw.

At one point most of our group was out on the cliff below the viewing area.  And as is normal, when other visitors saw us out there they joined us.  Some were just there to look but some photographers that were not with the Out of Chicago Conference were out there as well.  Colleen has always been an instructor who runs from student to student to take a look at what we are shooting, asking for our pre-shot titles and if we need any help.  I noticed her talking to a photographer that was not too far from me.  I listened to what she was telling him and then looked closely and realized he was not in our group!  I spoke up and said something to the effect that Colleen is such a great teacher she will take the time to teach anyone!  She then realized that he was not part of our group!  But he thanked her for the advice and we all got a great laugh out of it!

As the sun started to go down I moved around to capture what light that I could.

Michael had reminded us to look at the layers of the rocks and notice various colors that were still visible in the late light. He talked about the geology of the area for a few minutes which is always a plus!

Suddenly the sun broke through the clouds and I saw my last “pre-titled” image for this location!  “It Takes a Village” Look closely and you will see the buildings, short and tall!

As the sun set, I moved back up to the viewing area and looked to the east and south.

Then I looked for a more intimate landscape.   A path in the arroyo was perfect as the golden light of the sunset lit up the ridges.

And then for the size perspective shot of the day, I noticed the wife of one of the photographers in our group, wearing a red jacket (always the best for this type of image) and she was exploring a spot that was colorful and huge!  Spoiler Alert! There will be more of her and her red jacket in some of the next couple of posts!

Finally, after the sun had been down for several minutes the sky lit up with some color!

As the light was fading, we gathered up the group and as we walked down the incline we found a number of clouds that we named.  Clouds had been rare during our days there so we noticed them! I was too busy laughing and coming up with funny responses to remember to take any shots!  LOL!  I think the early mornings were getting to us…we were all overcome with silliness!  Always great when you can have some fun with your fellow photogs!!!

We headed back to the resort for another yummy outdoor dinner, some time to download, and hit the bed early as we had another early morning coming up.

Zabriskie Point is along Hwy 190 not too far from entering the actual valley.  There is usually plenty of parking, but sunrise might be a challenge as that is the best time to photograph this location.  But try sunset, it works, too!

For more info on Zabriskie Point check out the NPS website

Don’t forget your telephoto lens even in these grand landscape kinds of places!  I was so glad I still had my 70-200mm lens in the bag! In addition, I used my iPhone 12 Max Pro for most of the wide-angle images, so don’t forget your phone!

My next blog will be on the Mud Flats of Death Valley!

Click on any image to see a larger version OR visit my gallery to see and purchase prints of these and additional images: Zabriskie Point