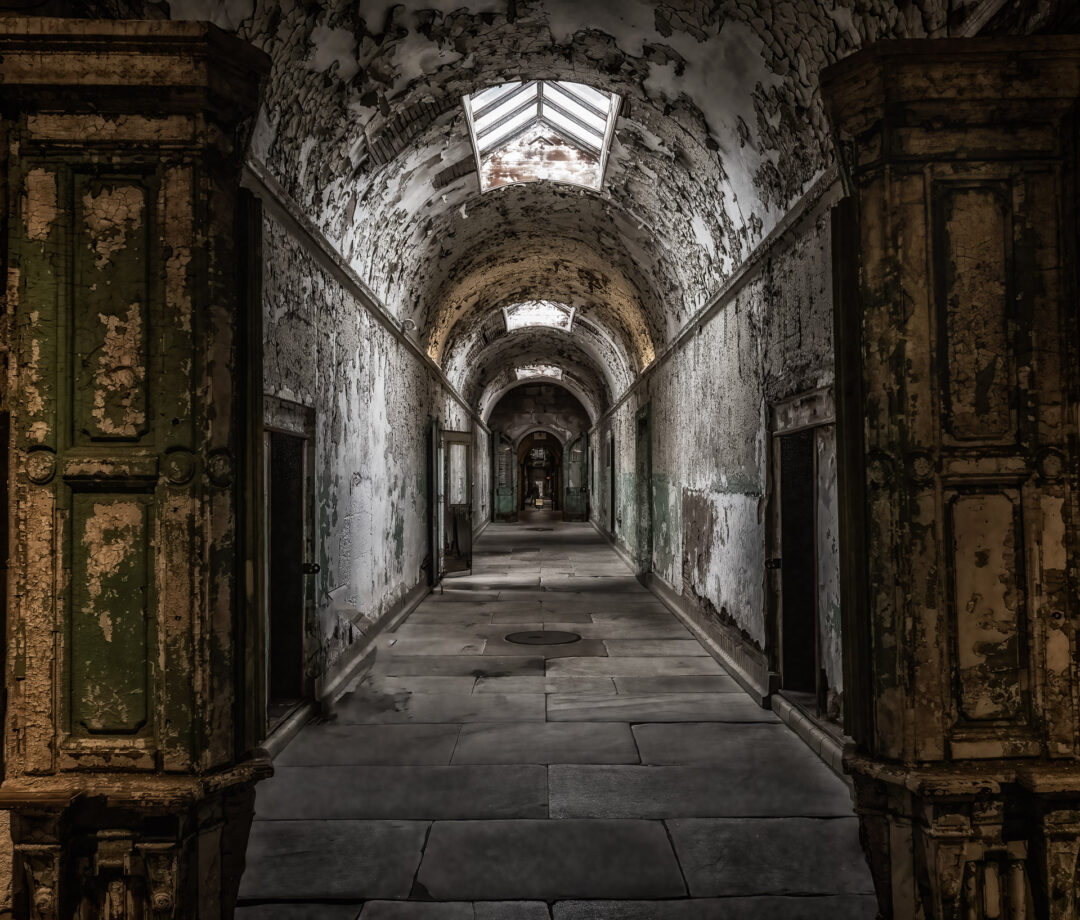 Famous as the prison that Al Capone spent some time in, Eastern State Penitentiary is an interesting place to visit and an amazing place to photograph!  The prison is located in Philidelphia with parking lots, restaurants, and other businesses adjacent.

Some Details from Wikipedia

The Eastern State Penitentiary, also known as ESP, is a former American prison in Philadelphia, Pennsylvania. It is located at 2027 Fairmount Avenue between Corinthian Avenue and North 22nd Street in the Fairmount section of the city and was operational from 1829 until 1971. The penitentiary refined the revolutionary system of separate incarceration first pioneered at the Walnut Street Jail which emphasized principles of reform rather than punishment.

Notorious criminals such as Al Capone and bank robber Willie Sutton were held inside its innovative wagon wheel design. James Bruno (Big Joe) and several male relatives were incarcerated here between 1936 and 1948 for the alleged murders in the Kelayres massacre of 1934, before they were paroled.  At its completion, the building was the largest and most expensive public structure ever erected in the United States and quickly became a model for more than 300 prisons worldwide.

The prison is currently a U.S. National Historic Landmark, which is open to the public as a museum for tours seven days a week, twelve months a year, 10 am to 5 pm.

The day we were heading into Philadephia dawned dark and dreary. As we drove into the city the rain continued.  We found the Eastern State Penitentiary in the midst of a bustling city.  We drove around a bit to find a parking lot that was not full and gathered up our photo gear and rain gear. As we entered the building, the rain began to pour!  As we walked through the “intake” area and picked up the earphones for the self-guided tour the rain came down even harder.   We had to run across an open batch to get to the entrance to the rim of the “wagon wheel” shaped building so we started our visit a bit soggy and cold!

This was photographically the perfect day for the gloomy mood I wanted for my images of this place.  In addition to the dark weather, the place itself is in pretty bad shape!  Some areas had been cleaned up somewhat and the leaks in the roof were minimal but in other “spokes” of the “wagon wheel” there was total chaos and major leaks!

My first view of the inside of the Eastern State Penitentiary.

As I walked along, some of the cells were open for viewing.   They each had a skylight which on this dark day in this dark place was the only light!

I reached the hub of the “wagon wheel” and as I spun around seeing the other “spokes” I decided a panorama was needed.

One of the “spokes” had a more ornate entrance.

One of the historic things about this prison is the fact that Al Capone was incarcerated here.  To “commemorate” that, a re-creation of his cell can be found in the “hub” of the “wagon wheel.”  The cell’s contents are based on a newspaper article that described in detail how Capone’s cell was furnished and also a bit about his cell-mate.  The article is on display outside the cell.

A couple of the “spokes” were 2 stories and we were able to climb the stairs to the 2nd story in one of them.

Several of the “spokes” have been left to crumble.  I am not sure if they will be doing anything with them in the future.

Although most of the viewable cells were very dark, there were a few that had a bit of color.  There had been some artists incarcerated here!

There were a couple of “special” cells I had heard about, so I found the gift store where I purchased my Eastern State Penitentiary coffee cup and got the directions to the cells.

I had seen many images of the special cell with the barber chair.  Supposedly each spoke had a barber cell but only 2 can be seen.

The other special area was the Hospital Wing in one of the “spokes”.   They give guided tours of this area but we had missed the time so maybe next time???

I took one more image of the other side of the “hub” and then we took the exit “spoke” back out into the dreary day!

A photography tip here:  I embraced the dreary light and when I did my post-processing I created a look that I liked, created a Preset in Lightroom, and then applied that darkness and tone to all of the images.  This keeps the Gallery more coherent.  The actual light was all over the place!

If you are in Philadelphia, take the time to visit this historic museum.  I highly recommend visiting on a cold and rainy day as it could not be nearly as dank and dreary, as a prison like this should be, on a bright and sunny day!

Click on any image to see a larger version OR visit my gallery to see and purchase prints and other items with these and many additional images: Eastern State Penitentiary

Since one of my photographer companions’ was a car guy, we decided to again stay “inside” and check out a car museum that my friend had heard about from his friend, who happened to own it!   My next blog will be on the Simeone Foundation Automotive Museum.

This site uses Akismet to reduce spam. Learn how your comment data is processed.