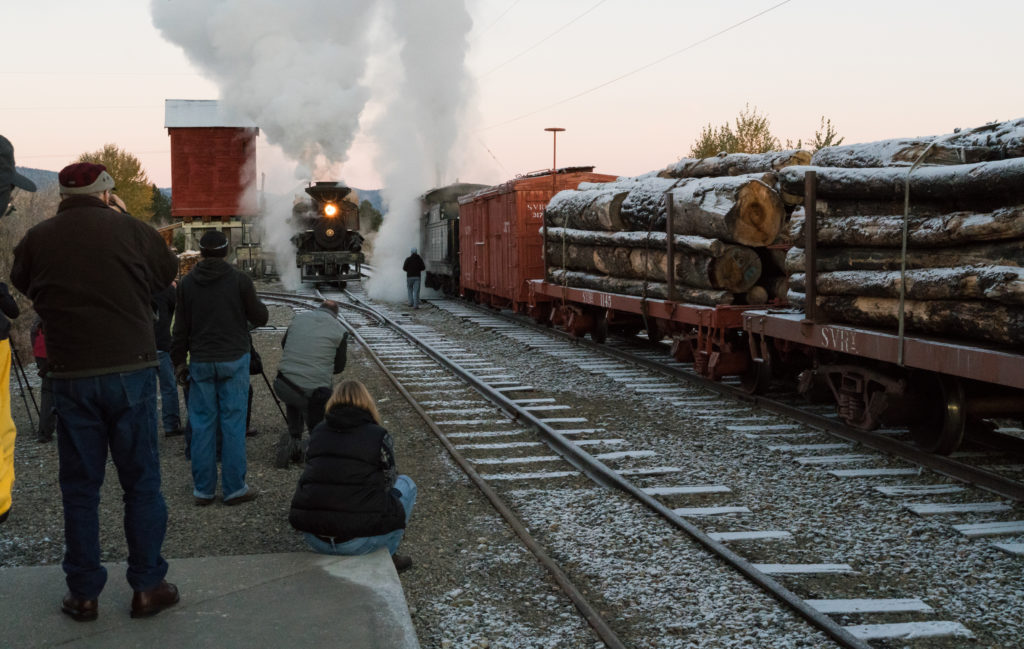 worthwhile and fun event!  The Sumpter Valley Railroad in beautiful Eastern Oregon runs from McEwen to Sumpter through a gorgeous valley.  The rails run mostly through an area that was dredged for gold early in the 20th century.  The railway was originally built by David C. Eccles to serve mining and lumber industry interests.  It first reached Sumpter in 1897 and ran into the 1930’s when it shut down.  Sadly, the railway was scrapped in 1947.

For years the S.V.R.R. was gone but never forgotten.  In 1971 a small group of volunteers set out to rebuild it.  They found the original 1915  two-truck Heisler number 3 in Cascade Idaho that had been used on the S.V.R.R. and painstakingly refurbished it.  After a lot of hard work and donations, the Heisler was on the rails at McEwen Oregon and the ribbon cutting ceremony was on July 4th 1976.

Over the years the volunteers have rebuilt the railroad all the way to Sumpter and they acquired two more steam engines that had been used on the S.V.R.R.  These two 2-8-2 Mikado class locomotives were in Skagway Alaska.  The two locomotives were purchased for a dollar each but had to be shipped at a cost of $25,000.  More history can be read and information on trips found at the Sumpter Valley Railroad website.

Through the extraordinary work of these volunteers, you can now take a step back in time and relive the amazing feeling of steam train travel during the summer months and on many special event trips.  I discovered the S.V.R.R. when I searched for another historic train ride after the Thunder Mountain Line in Horseshoe Bend Idaho suspended operations last year.  I was deeply saddened by the Thunder Mountain Line closing because our family had taken many trips during Christmas on the line.  However,  I was happy to find that the S.V.R.R. was operating in Eastern Oregon and wrote a blog post about my trip last year here.

If you’ve read last year’s post, you know that I didn’t research well and missed the season last year.  This year, I planned well in advance and got reservations for myself and my son-in-law William Jensen (check out his awesome photography page!)  I also reserved a house on airbnb.com which was a great deal and cheaper than a hotel.

The weather was pretty nice during the daytime but was chilly and frosty in the morning when we arrived at 6 am.  Many of the photographers met and huddled inside the cozy station at McEwen and enjoyed the fire and a complimentary breakfast until the stars of the show, the locomotives, started steaming into the station. 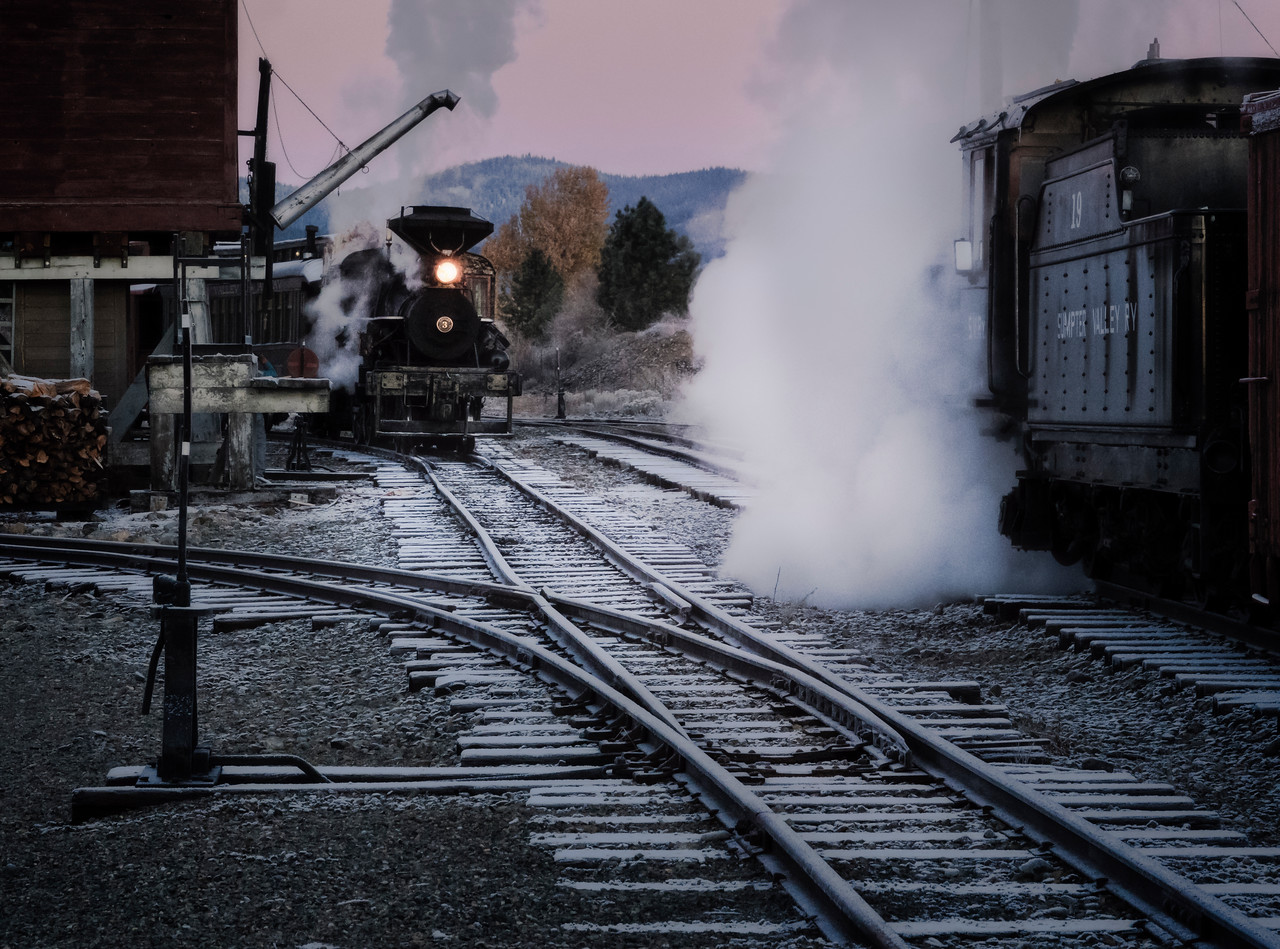 The dawn made a beautiful pink glow over the mountains behind the trains.

We all packed our gear onto the restored 1890 wooden coach and headed down the rails and back in time.  The train stopped at various picturesque spots and we were allowed to get out.  Then the engineers took the trains back and forth a few times for us to photograph.  The staff was very accommodating and friendly!  This trip was very economical at $100 for Saturday and $160 for Saturday and Sunday.  The day lasted from 6 am till nearly 4 pm and included lunch at the Sumpter depot.

They really poured on the steam for us!

The photo-ops were abundant throughout the day and included a few reflecting ponds.

Number 19 steams past a reflecting pond.

I also met my Facebook friend and fellow Arcanum.com alumni Lori Rowland in person.  Lori takes many wonderful pictures of the Eastern Oregon area and it was cool to meet in person. You can see her work at her website.  Lori was there with her friend Helen Hall who also has some wonderful images at Eastern Oregon Images.

To see a slideshow of the other awesome pics from the trip check out my Gallery.  Click on the pictures to find out about getting prints or downloading to use on the web.

The pictures of these awesome old steam locomotives are great to look at but the sounds can’t be heard.  The sound of the engines and the steam whistle echoing through the valley really take you back in time.  The next best thing to being there is video, right?  I recorded video with my Sony A7Rii and DJI Mavic Pro drone.  It was a pleasant surprise that they allowed me to use the drone as it seems there are more and more places forbidding it.

Check out my video here:

Thanks for reading my blog!  I hope you can visit The Sumpter Valley Railroad sometime so that it stays around for many years for us to enjoy.  You may also be interested in my series of blog posts about the abandoned Camas Prairie Railroad.  In the series,  I travel and photograph the entirety of the amazing railroad with its many huge trestles and tunnels.

I am a landscape photographer and travel blogger at Rustic Lens Photography. I explore the Northwest United States along with any other destinations I can get to.