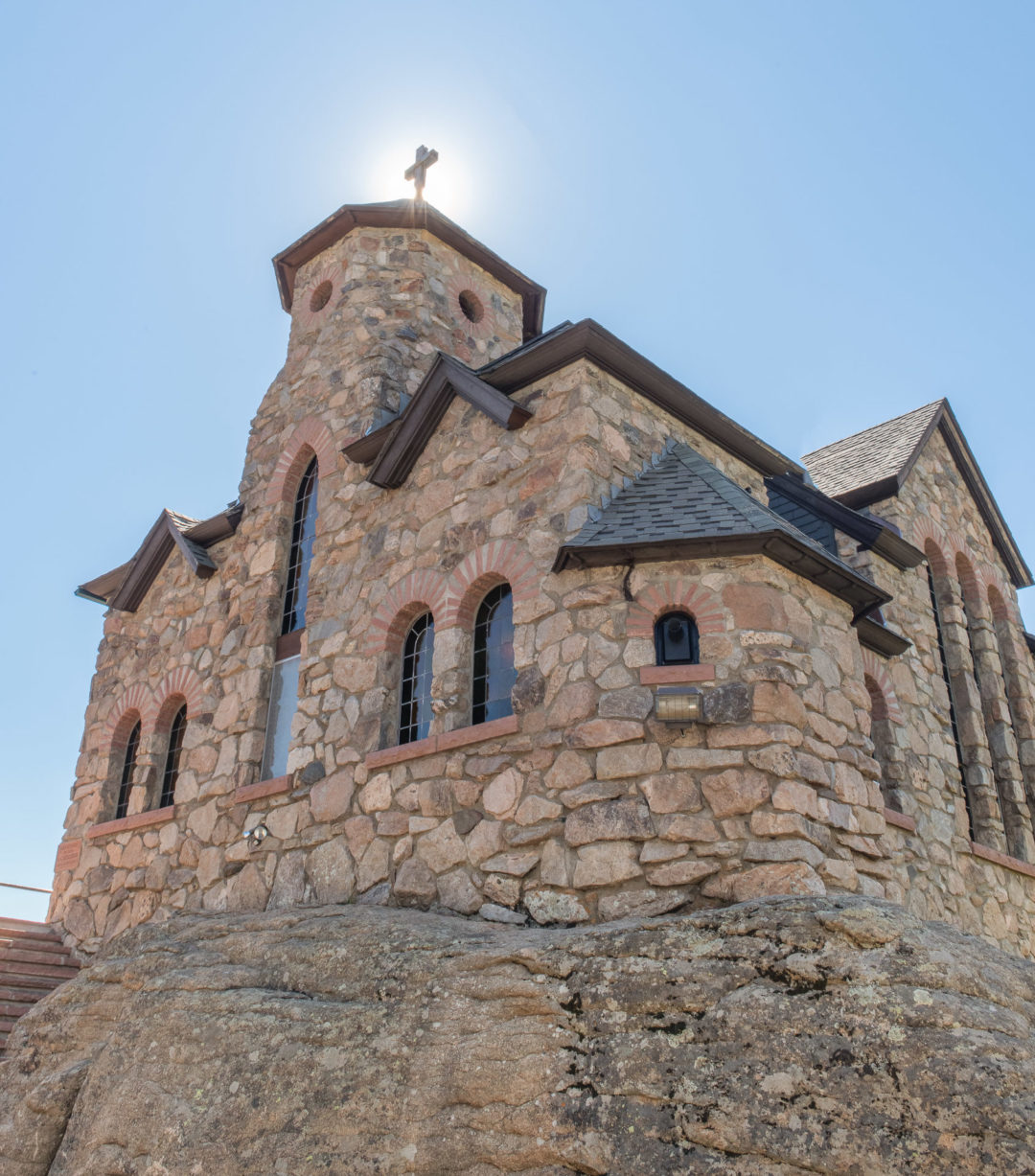 I had heard about the Chapel on the Rock that was close to Estes Park so when I had a few minutes I looked it up and realized it was only a few miles from where we were staying.

The Chapel on the Rock (officially, Saint Catherine of Siena Chapel) is a functioning Catholic chapel and tourist landmark in Allenspark, Colorado, USA. The chapel is located on the grounds of the Saint Malo Retreat, Conference, and Spiritual Center of the CatholicArchdiocese of Denver. The chapel is open to the public.

In 1916, Monsignor Joseph Bosetti came across a large rock formation just east of Rocky Mountain National Park and inspired by the Biblical phrase “upon this rock I will build my church”, he envisioned a church built on the rock. His lack of funds delayed construction for nearly 20 years and he struggled with the Colorado Highway Department to keep the rock intact. Eventually, land for the church was donated by Mr. and Mrs. Oscar Malo and Denver architect Jacques Benedict designed the chapel, which was completed in 1936. In 1999 Boulder County designated the chapel as a historic site.

Pope John Paul II prayed at the chapel during his visit to Denver for World Youth Day in 1993; he blessed the chapel afterward. The pope later hiked in the surrounding woods and spent some time at the Saint Malo Retreat Center.

When we arrived I was a bit disappointed as the water was very low compared to some of the images I had seen but by doing some working with the terrain I was able to get a reflection.

We realized that the chapel was open so we walked around and up to the entrance.

It is not a very large chapel but it was still very pretty inside.

There were several people visiting when we first went in but we hung around a bit to get some shots without people. There was a volunteer there and we started talking to him (always a great source of info but this time we hit the jackpot!) and he asked us where we were from, etc. We told him we were from FL and were totally amazed by the area and were having a blast photographing everything. We mentioned we had done a bit of dark sky photography from the backyard of the house we had rented since Estes Park is a Dark Skies city.

He then told us that we should come back later that evening as the Milky Way was even more visible out there even further from the city and that from the front of the chapel the Milky Way was coming right out of the top of the building.

We decided to come back that evening if the sky was clear.

Later that evening we made our way back to the Chapel on the Rock and were a bit surprised to find a bunch of other photographers there. We wandered around looking for a view we liked and eventually found a spot.

By this time most of the photographers had packed up and left but there was one who had not. He mentioned that he was looking for a specific view and was going to be light painting the chapel so we set up and decided to piggyback on what he was doing.

We waited a bit but he did not seem to be doing much so we set up and found that as cars went by on the elevated road in front of the chapel that it was light painted pretty well. So we took advantage of that and got some shots.

Then all of a sudden, out of the pitch dark night, the photographer starts yelling at us. He was upset that we were still there. I told him that we were not disturbing him as we were not doing any light painting and that he was free to do what he wanted. But he continued to yell and at one point said he wanted a very specific shot and was using specific lighting that he did not want anyone else to see.

At that point, we decided it was not worth hanging around so we packed up and left.

We really wanted to try our own light painting so we went back the next night. That night there were fewer photographers but one was using a large softbox to light the chapel. As he saw us coming he said he was almost finished and would be packing up shortly. Another photographer came up and asked if we were light painting and if he could shoot with us.

We were more than happy to work with him after the previous night’s unfortunate turn.

We set up for similar shutter times and then did a count down so we all hit the shutter at the same time. Then we light painted the chapel with a flashlight.

Cooperation is so much more fun and rewarding!

Chapel on the Rocks is a must-see if you are visiting the Estes Park area.

If you can visit at night, the Milky Way is visible with the naked eye on a clear night, especially in the summer months. But it is so much fun to photograph the Milky Way with such an interesting foreground!

Please see these and other images of the Chapel on the Rock on my website.