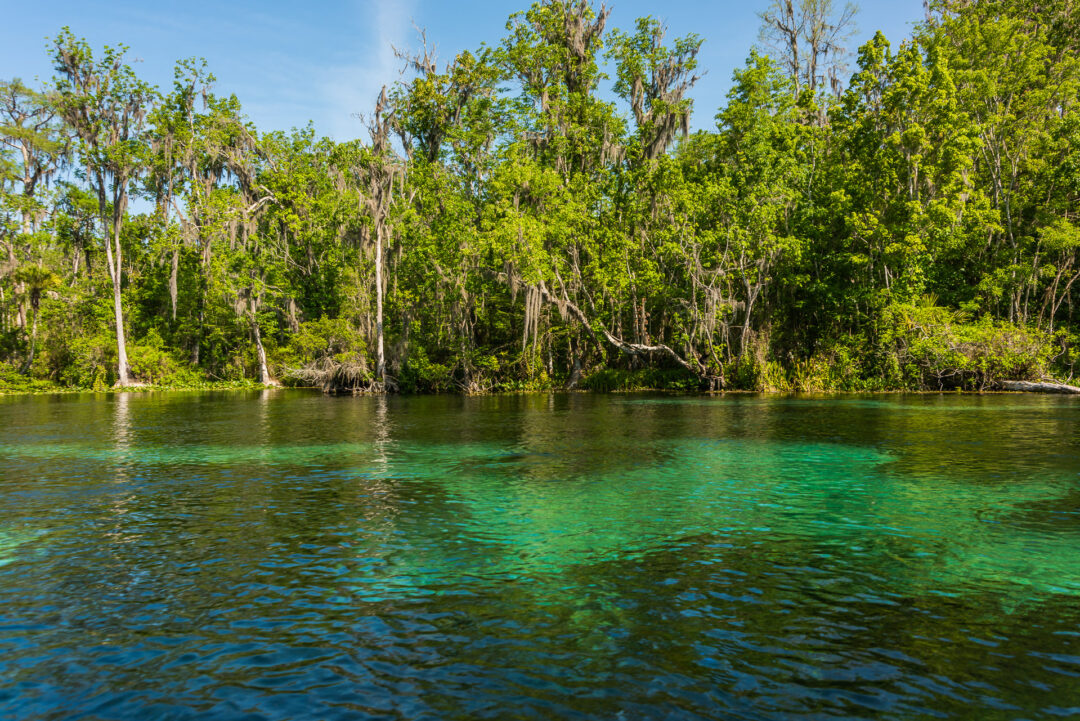 When my family first moved to Florida a “long” time ago there was no Disney World or Universal! We went to the quirky roadside attractions Florida was known for. One of the biggest and most famous was…

With glass bottom boats on crystal clear waters and the filming of “jungle” movies happening there, Silver Springs was one of the main attractions in Florida!

I remember driving on small roads and feeling like we had driven to the middle of nowhere to get there!

Over the years the park fell on tough times with the competition from the theme parks so the state of Florida purchased the attraction and created Silver Springs State Park.

They still have the more touristy section that has restaurants, gift shops, and glass-bottom boat tours. For our visit this time, though, we went back to the basics and with rented kayaks, took a paddle down the Silver River to get a glimpse of the real Florida!

Did I mention I had never kayaked before! I canoed years ago but had never kayaked. Several of my friends have kayaks and I had missed out on some paddles that looked pretty interesting from the images they came back with. So I decided it was time for me to try kayaking.

I rented a kayak from Discovery Kayak which brings their kayaks to Silver Springs (among other locations) in the Ocala area. The owner and his helpers were excellent. They took the kayak right to the edge of the water and helped me get launched.

We paddled from a side branch of the Silver River to the actual river. The water was crystal clear, cold, and beautiful. Even though it was March, by the time we were out on the river, for a while, it was pretty hot while paddling in the sun. But in the shade of the huge trees along the shore, it was cool and wonderful.

I spent most of my time trying to figure out how to paddle and steer. I spent a lot of time getting back out of the weeds and trying to stop from running into my fellow kayakers and branches hanging over the water.

This river is very bendy and the downstream current was always faster at the bends. At one bend, most of my friends were ahead of me so when one of them got the stern of her kayak caught under a branch, I had to quickly steer over to her. The current grabbed the kayak and I hit her kayak pretty hard but cushioned it somewhat with my paddle. I hand walked my kayak back toward the stern and had to untangle the branch from the cargo netting and then pushed down on the stern to get the kayak out from under the branch…all while the current was pulling on both of us! I was finally able to get her loose and we continued on down the river.

We could see some fish on the bottom and saw some birds and a few alligators along the shore or edge. I crossed over a large section of underwater weeds and the folks behind me yelled and said there was a manatee! I turned in the kayak, carefully, just enough to see the manatee’s big tail as it dove back down under the water. I wanted to go back but the current was too strong to turn around!

We were hoping to see the wild monkeys that the Silver River is famous for…they escaped back many years ago from film crews making those “jungle” movies and have flourished in Florida’s tropical environment. But we did not see any that day! We need to go back and try again next year!

I used a high shutter speed (at least 1/200s but even faster is best) to freeze the images since I was always moving. I have done that on larger boats successfully so I was happy to see that it works for “some” of the images made in a kayak!

I even tried some ICM (intentional camera movement) which was pretty easy on a shaky kayak! LOL!

I did see some strange shapes along the shore! It looks like the monster from the black lagoon was watching us from the cover of a tree root!

The perspective you get from a kayak on the water is so unique. Since you are so close to the water it is like being in the water. Seeing the animals and flowers from that viewpoint is really amazing!

We had been given a map by the Discovery Kayak folks and after paddling for around five miles, we saw the sign for the turn to the boat ramp where we would be picked up.

We still had over an hour left on our rental time but considering the current was pretty strong, we decided going further downstream, and then having to paddle upstream, was not a wise idea so we took the turn toward the boat ramp.

The guys from Discovery Kayaks were there waiting for us and helped us get out of the kayaks and pulled them up on shore. They hauled all the boats, even those that my friends had brought of their own (for a small fee), up to the parking lot and loaded them all onto a trailer attached to a large passenger van. We loaded into the van and they drove us back to the Silver Springs State Park parking lot.

After my friends loaded their kayaks back on their vehicle we headed to a great restaurant, recommended by the kayak guys, in Ocala. The Bank Street Patio Bar was open for lunch and after all that paddling we were starving. We sat outside on the patio and ordered some tasty food. We enjoyed our meal and reminisced about our morning on the Silver River.

Since I was learning how to manage a kayak I did not get many images but I did shoot a few!

I enjoyed kayaking so much that I subsequently ordered an Oru Kayak that folds up like origami, weights 26#, and fits in the back of my SUV. I also ordered a telephoto lens that goes from 18-300mm so I can use it on one of my older Nikon DSLRs and only need one lens for all my needs! I keep them in dry bags when not shooting in the kayak. Much more kayaking adventures and images to come in the future.

Take some time and make the trip to the Ocala area. Check out the tourist attraction at Silver Springs State Park but I highly recommend a kayak trip on the Silver River. Discovery Kayaks does guided tours if you would prefer a more structured visit.

For these and additional images from Silver Springs State Park, please click on an image or visit my gallery!

My next post will be Myakka River State Park.