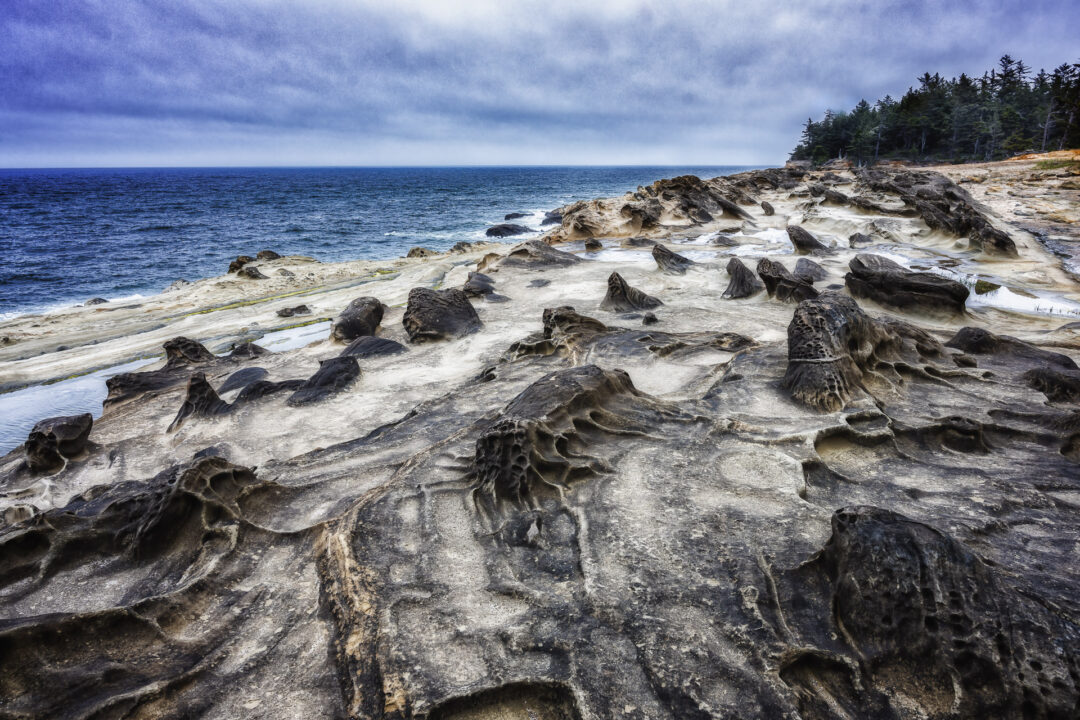 After the long months of lockdown in 2020, I was ready to hit the road (air actually) for a…

Our first night at the large house rented by our mentor and leader, Colleen Miniuk, was for getting settled in, getting to meet our fellow “Sheographers“, and getting an overview of our coming adventure.

Our first morning was a little early but based on Florida time, I got to sleep in!

Our day was devoted to Shore Acres State Park, which is not far from Coos Bay.

The park features 5 acres (2 ha) of formal gardens including a rose-testing plot and Japanese lily pond, as well as ocean views and beach access. In the cooler months, visitors can watch storms and migrating whales from the park’s sandstone cliffs.

Shore Acres was originally an estate owned by Louis J. Simpson, a Coos County timber baron and son of shipping magnate Asa Meade Simpson. After a fire and financial losses devastated his estate holdings, Simpson sold the land to the State of Oregon for use as a park in 1942. The state, which acquired park additions from other owners between 1956 and 1980, began restoring the garden in 1970.

As is it often is in this part of Oregon, the weather was a bit misty and windy when we arrived at Shore Acres Botanical Gardens. We were still happy to get shooting, working on some macro and close-up images of the flowers. With the rain, we had the added bonus of flat lighting, bold colors, and lots of water drops! The best conditions for shooting flowers. The wind was a bit of an issue but you learn to work with what you are given!

The rhododendron bushes were everywhere! The colors were amazing!

There were a lot of other colorful flowers to shoot as well.

Some were very small!

Some were pretty big!

I even found some wildlife!

I got down on the wet ground to get this image of an iris!

With all the colorful bushes I just had to try some ICM (Intentional Camera Movement with multiple exposure)!

We finished up in the gardens and decided to take a path down to the shore that is just below the gardens!

The weather was still misty and windy so getting a great sky was not possible. Keeping the water from gathering on my lens was not easy!

When we finished shooting at this cove we climbed back up to the gardens and drove over to Coos Bay for some lunch. We came back to Shore Acres stopping at an area just north of the gardens. Following a path out toward the shore, there are huge lines of rock that the ocean has been flowing over for eons, creating a fantasy land of shapes and contrasts!

We then moved a bit farther north to get to a viewpoint to see the Cape Arago Lighthouse. I somehow ended up on the “wrong” path from where everyone else went but ended up with the “right” image from a slightly different viewpoint!

From here we drove to another spot where we could overlook the water with the rocks and waves below us to get some extra long exposures and some of that cotton candy-looking water action.

From here we drove south again and stopped by Simpson Reef Overlook to hopefully see some seals and we sure saw some!

Our last stop for the day was Cape Arago State Park but by the time we arrived the light was very flat and the mist had come in so I shot a wildflower and called it a day!

For larger versions of these images please click on any image or you can see the full galleries at Shore Acres Botanical Gardens and Shore Acres State Park.

My next stop is Coquille Point, Bandon, OR.