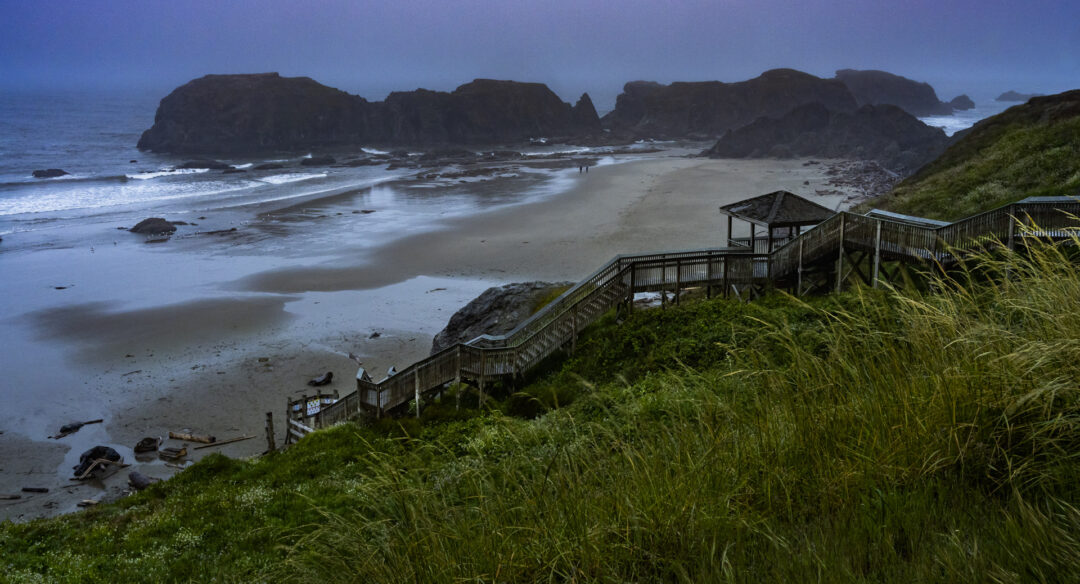 Our second morning in Oregon was an early one. I got up at 4 am (still not too bad on FL time, 8 am) and eleven women got themselves some breakfast, loaded their gear, and took off for…

the coastline, this time Coquille Point in Bandon, Oregon.

We arrived around 5:15 am and saw that the weather was again pretty dreary. I put on my rain gear, stopped for a couple of shots at the top of the cliffs, and then made my way down the long and slippery stairs!

Once I made it down to the shore I looked around to decide where to go first!

The big group of rocks/stacks that were to the north seemed to be the most promising. I was hoping to find some marine critters!

The tide was pretty low so we were able to walk out quite a way towards the rocks.

I immediately saw the large number of birds that were along the shore. It was not easy to get close to them as I did not have my normal “bird lens” with me but I would do the best I could with what I had.

This time I pulled out my Nikon 70-200mm f2 lens so I would have some ability to get some bird images. I was carrying my wider lens as well on my other camera.

I was able to get fairly close to a Black Oystercatcher (a first siting for me) as it was bathing on the other side of some rocks.

The image is not great but I had my first marine bird image!

I looked through a cleft in one of the rocks, that was close to the tide line and saw a couple of birds sitting on a rock. I later learned that they were Guillemots (another first).

As I walked along the shore toward the larger grouping of rocks I saw some strange tracks in the sand. At first, I was thinking sea turtle as that is what I would most likely see on Florida beaches but I looked a little harder at the rock shelves across some water and realized that there were Seals lying about over there.

Upon surveying the entire shelf with my telephoto lens I realized there was a whole group of females and their pups lounging around out there!

Okay! A couple of bird species and seals…what would be next from Coquille Point?

I found a small tide pool on a short rock and was happy to find a couple of turquoise-colored anemones. I did not have my polarizing filter with me so I had to do some great yoga bends to get an image without falling in the pool and not too much reflection. The dreary sky helped that immensely!

As I walked along the tide-line I noticed that one big rock had a bit of a hangover on the ocean side and that there was a pool of water right below it. As I looked closer I realized there were anemones and starfish attached! It was very dark under there but I did the best I could without a flash or reflector! Again, trying not to fall in the water! It was cold!

Having satisfied my critter fix for the day I went looking for some wide-angle possibilities.

The clefts in the rocks with the water shooting through drew my attention. I slowed down my shutter speed with the camera on my tripod.

I was able to slow down the wave and splash action to get some more dynamic images.

We were almost out of time so I decided to look south and try for a wide-angle image of the beach. Since the lighting was so low and dreary I decided that a Black & White treatment would work best for this view from Coquille Point beach toward Bandon Beach. The smooth pools worked great for the reflection of the craggy rocks.

From here we went back to the house to dry off, warm up and eat some lunch. We had some class time and post-processing time and then got ready for our next adventure.

Part 3 will be about our 2 trips to Face Rock Beach, Bandon, OR.

For larger versions of these images please click on any image or for these and more images, please visit my Gallery.